From photographer favorite to contemporary art muse, the appeal and mystique of Marilyn Monroe endures 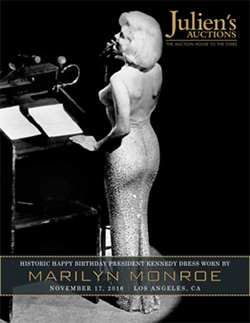 New York, New York – (September 7, 2016) – On Saturday, May 19, 1962, at a Democratic fundraiser and early 45th birthday celebration, President John F. Kennedy took his seat in Madison Square Garden anticipating what has now become one of the most iconic moments in entertainment and political history. In front of 15,000 guests, many of them celebrities, actor Peter Lawford was about to make an introduction that would change the course of pop culture and Presidential folklore forever. Under a bright spotlight, the legendary Marilyn Monroe walked on stage and peeled away her white ermine fur coat, revealing a skintight, sheer, flesh-colored dress that sparkled with over 2,500 handstitched crystals. The custom Jean Louis creation was so tight fitting that Marilyn wore nothing underneath and had to be sewn into it last minute. Original sketch illustrated by Bob Mackie. When Marilyn appeared and the dress was finally revealed, the entire audience gasped.

After Peter Lawford introduced her as the “LATE” Marilyn Monroe, she flicked the microphone and began to sing “Happy Birthday Mr. President” in her trademark sultry, sexy voice with original lyrics she wrote herself. 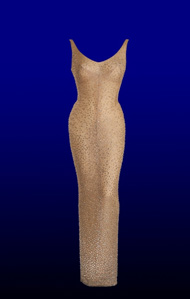 However, it was her intimate tone and projection of the words “Mr. President” that would stun the audience, excite the press and become a milestone in popular culture. The song and performance were remembered for many reasons, not the least because it was one of her last public appearances before her untimely death less than three months later. Sadly, President Kennedy died a year later and that infamous night at MSG was the last known time they saw each other. The rendition by Marilyn remains one of the most famous, delivered in her halting, breathy tone. All in all, it lasted approximately 30 seconds, but more than five decades later, it remains the most famous version of “Happy Birthday” ever. The dress, the performance, Jacqueline Kennedy’s absence and photographs from the evening would spark ravenous rumors of an affair between the President and Marilyn. 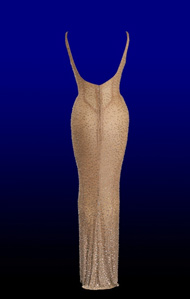 In fact, it was Marilyn’s death in 1962 that prompted American artist Andy Warhol to create “Marilyn’s Diptych” — one of the most famous art homages to her, permanently securing Marilyn’s place in contemporary art history.

“Marilyn Monroe singing ‘Happy Birthday Mr. President’ is certainly one of the most famous impromptu performances in American history,” said Darren Julien, President & CEO of Julien’s Auctions. “That rendition has lived on for decades as one of the most remarkable events in her career and certainly one of the most storied tales in popular culture history — a moment in time squarely at the center of the 1960s, Hollywood and Camelot. We are incredibly privileged to have the opportunity to offer this amazing dress to collectors, fans and contemporary art enthusiasts around the world.”

On November 17, 2016, Julien’s Auctions, the world-record breaking auction house to the stars, will once again make history when it exclusively offers the Marilyn Monroe “Happy Birthday Mr. President” Jean Louis creation at auction. Julien’s Auctions will give collectors and fans from around the globe one of the most awe-inspiring moments in auction history when the gavel comes down on the final bid for this remarkable object. 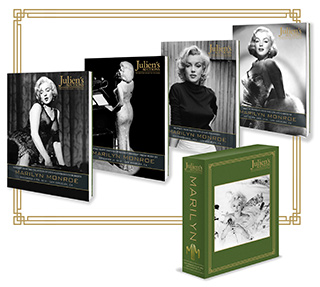 Prior to the auction, the “Happy Birthday Mr. President” dress will go on an exclusive world tour. The dress will exhibit at MANA Contemporary in New Jersey as part of the Exhibition “Marilyn: Character Not Image” followed by the Newbridge Silverware Museum of Style Icons (MOSI) in Kildare, Ireland before making its way back to the Julien’s Auctions Gallery in Los Angeles.

“We have had remarkable opportunities to offer unique objects related to Marilyn Monroe in the past,” said Martin Nolan, Executive Director of Julien’s Auctions. “To be part of the continued interest and excitement around this legend is always thrilling. This dress, this story, this momentous occasion represents a defining moment in history. This auction will remind the world why Marilyn Monroe remains an icon.”

The dress will be presented on the custom-made mannequin that was designed to match Marilyn Monroe’s exact body measurements. Collector edition catalogs can be pre-ordered at www.juliensauctions.com.

Admission: $25 per person.
100% of the admission proceeds benefit The Downtown Women’s Center.

ABOUT JULIEN'S AUCTIONS
Julien's Auctions is the World-Record Breaking Auction House to the Stars. Collaborating with the famous and the exclusive, Julien's Auctions produces high profile auctions from the world of entertainment, Rock n' Roll, sports and art. Founded by Darren Julien, Julien's Auctions has achieved international recognition for its extraordinary auction events which attract thousands of collectors, investors, fans and enthusiasts from around the world. Julien's Auctions specializes in auctioning iconic artifacts and notable collections from the world's most recognizable stars including Marilyn Monroe, John Lennon, Ringo Starr, Lady Gaga, Banksy, Cher, Michael Jackson, U2, Barbra Streisand, Larry Hagman, Les Paul, Bob Hope, Elvis Presley, Frank Sinatra, Jimi Hendrix and many more. Each auction is beautifully documented in a collectible high gloss auction catalog uniquely capturing the story of the collection and photographs of each treasure. Based in Los Angeles, Julien's Auctions has an international presence and is featured widely in the press both domestically and internationally while bringing their exhibitions and auctions to destinations worldwide including London, New York, Las Vegas, Japan and China. Live auctions are presented for bidders on-site and online via live streaming video, by phone and by text. Darren Julien, Founder & CEO, and Martin Nolan, Executive Director, head up the organization and together have led the renowned auction house to world record breaking auction results. For more information, go to www.juliensauctions.com.

ABOUT NEWBRIDGE SILVERWARE MUSEUM OF STYLE ICONS (MOSI)
Since 1934, Newbridge Silverware has been Ireland's premier designer and producer of homeware and giftware products. Today the Newbridge Visitor's Center hosts the acclaimed Museum of Style Icons (MOSI). The museum is a permanent exhibition dedicated to design and style excellence while celebrating some of the world's most iconic personalities. The museum features personal effects and items from Ireland's most notable designers and also showcases artifacts and personal items from legendary stars of film and television known worldwide. These include Marilyn Monroe, Audrey Hepburn, Bette Davis, Gloria Swanson, Barbra Streisand, Julie Andrews, Vivien Leigh, Elizabeth Taylor, Jean Simmons, Sarah Jessica Parker, James Stewart, Ingrid Bergman, The Beatles and so many more. Newbridge is located in Kildare, Ireland near R445 and Main Street. Telephone contact is +353 45 431301. Hours of operation are Monday - Saturday 9am-6pm and Sunday and Holidays from 11am - 6pm. For more information on Newbridge Silverware & Cutlery, The Newbridge Silverware Museum of Style Icons (MOSI), Newbridge Jewelry and events, go to www.newbridgesilverware.com.

ABOUT MANA CONTEMPORARY
Founded in 2011, Mana Contemporary is a leading arts destination dedicated to celebrating the creative process. Headquartered in a former tobacco warehouse in Jersey City, Mana unites artists' studios, exhibition spaces, and ancillary services in a single location, facilitating conversation and collaboration among its burgeoning creative community. Together with its sister campuses in Chicago and Miami, Mana serves as a lively center for all members of the art world. Mana Contemporary is home to the Richard Meier Model Museum, Ayn Foundation, the International Center of Photography, The Florence Academy of Art, Gary Lichtenstein Editions, Eileen S. Kaminsky Family Foundation, Armitage Gone! Dance, Keating Foundry, Shen Wei Dance Arts, Mana Urban Arts Project and many others. For additional information, please visit www.manacontemporary.com.