Beverly Hills, California -- (June 2, 2015) -- Julien's Auctions, the world's premier entertainment and music memorabilia auction house, announced the upcoming sale of the most historically important guitar associated with The Beatles ever to be offered -- John Lennon's original 1962 J-160E Gibson Acoustic guitar. The guitar has been lost for over 50 years and represents a rare and significant guitar to John Lennon's history.

It's September of 1962 and The Beatles' John Lennon and George Harrison each purchase jumbo J-160E Gibson acoustic guitars from Rushworth's Music House in Liverpool for £161. Never would one imagine that the guitars would become so significantly important to the history of the Beatles nor engage such an undeniably intriguing story of its future whereabouts. When purchased by two of the members of the Fab Four, the guitars were the only ones of their type in the country which were said to have been flown to England by jet from America after being specially ordered. The two guitars were identical apart from the serial numbers. In December 1963, during The Beatles' Finsbury Park Christmas Show, John's guitar went missing and he later replaced it with a 1964 model. This guitar was lost for over 50 years and will now be offered at Julien's Auctions Icons & Idols Rock n' Roll Auction event on Saturday, November 7, 2015.

The Beatles traveled from Liverpool to London’s EMI Studios on September 11, 1962, the day after receiving the guitars. The first song recorded that day was “P.S. I Love You,” followed by “Love Me Do.” It was Lennon who used this guitar on many of the recordings they did in 1962 and 1963 that required an acoustic guitar.

John so loved this particular guitar that he would take it home and write songs on it with Paul McCartney. Beatles hits like “She Loves You,” “I Want to Hold Your Hand,” “Please, Please, Me,” “All My Loving,” “From Me to You,” “This Boy” and more were written with this guitar.

Historians and Beatles fans can also find this particular guitar on the UK singles “Please Please Me/Ask Me Why” and “From Me to You/Thank You Girl.”

Andy Babiuk, author of the critically acclaimed book Beatles Gear — All The Fab Four’s Instruments From Stage To Studio, recently discovered the guitar when John McCaw’s close friend and guitar instructor Marc Intravaia contacted Babiuk at his guitar shop, Andy Babiuk’s Fab Gear in Rochester, New York. “I get calls and email all the time with people telling me that they think they have an instrument owned by The Beatles and 99% of the time it’s nothing, but there was something about McCaw’s story that was intriguing,” said Babiuk, the world authority on equipment used by The Beatles. 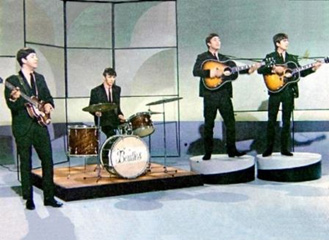 “In April 2014 I was leaving my guitar group’s weekly jam and noticed a magazine from May 2012 in the studio’s bookcase which featured a cover story titled the “George Harrison Collection.” There was a photo and bio of the J-160E which bore many similarities to mine. I saw identical marks in the same location on each guitar. Reading on, the story noted that the two Beatles swapped guitars in 1963 for reasons unknown.” This is when my heart skipped a beat and the journey began. We searched for the person who could help us confirm the identity of my guitar. This led us straight to Andy Babiuk, the world’s leading expert on all Beatles gear,” said John McCaw.

After Babiuk examined the guitar, he was able to match the wood grain in the spruce top to photos of Lennon playing the guitar with The Beatles in the early 60’s. “Wood grain is like a fingerprint, no two are the same, and without a doubt it is a match,” said Babiuk. Lost for over 50 years, John Lennon’s beloved Gibson J-160E was finally found. “It is one of the most important of all Lennon’s Beatles guitars, as he used this J-160E to write some of The Beatles’ biggest hits, and played the guitar on countless live performances and on many Beatle recordings,” said Babiuk. “It is without a doubt one of the most historically important guitars to ever come up for auction.”

The guitar has never been modified in any way. It has never been refinished and has had no hardware or electronic changes. In viewing 1963 videos of “I Want to Hold Your Hand” and “This Boy,” marks on the guitar further confirm its identity. 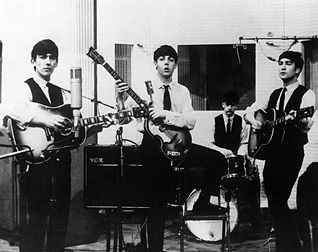 The John Lennon Gibson J-160E holds the distinction of also being the guitar that will be featured on the cover of the new Beatles Gear — The Ultimate Edition book with a street date of October 27, 2015. A percentage of proceeds from the sale of the guitar will go to Spirit Foundations, Inc., a non-profit organization founded by John and Yoko.

John Lennon has been said to be the most iconic Beatle of the group. He was the band's most committed rock & roller, its social conscience and its slyest wit. He wrote or co-wrote many of the classic Beatles songs and performed them with such a distinct voice that he became one of the greatest singers rock n' roll ever produced. He died on December 8, 1980 at the age of 40. To this day Lennon's image is used by rock fans as a symbol of peace.

In an exclusive special engagement, the Lennon J-160E will go on display prior to the auction at The LBJ Presidential Library in Austin, Texas, from June 13-29 for the opening of The GRAMMY Museum® and Fab Four Exhibits Ladies & Gentlemen...The Beatles Exhibition! It will then be displayed at the GRAMMY Museum® in Los Angeles from July 2-September 7, 2015 and at Julien's Auctions Beverly Hills from November 2-6, 2015.

All photos featuring The Beatles in this news release are for illustration of the story purposes only. Any use of these require a separate license from source from media outlet. Photo of guitar and catalog cover photo credit is Julien's Auctions. 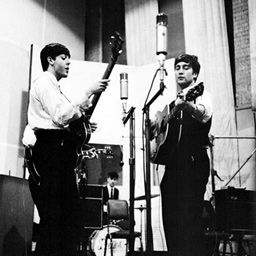 ABOUT THE GRAMMY Museum®
Paying tribute to music’s rich cultural history, this one-of-a-kind 21st century museum explores and celebrates the enduring legacies of all forms of music, the creative process, the art and technology of the recording process and the history of the premier recognition of excellence in recorded music — the GRAMMY® Award. The GRAMMY Museum features 30,000 square feet of interactive and multimedia exhibits located within L.A. LIVE, the downtown Los Angeles sports, entertainment and residential district. Through thought-provoking and dynamic public and educational programs and exhibits, guests experience music from a never-before-seen insider perspective that only the GRAMMY Museum can deliver. For more information call 213-765-6800 or visit www.grammymuseum.org. For breaking news and exclusive content follow @TheGRAMMYMuseum on Twitter and Instagram or like “The GRAMMY Museum” on Facebook.