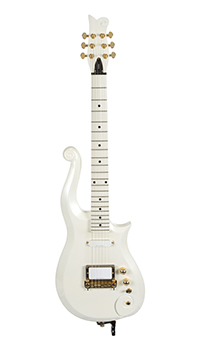 Los Angeles, California – (February 5, 2018) – Coming off another record breaking season that witnessed achieving the world record for a guitar played by Prince sold at auction ($700,000), Julien’s Auctions has announced –– PROPERTY FROM THE LIFE AND CAREER OF PRINCE. Julien’s will pay tribute to one of the greatest music legends of all time in this exclusive presentation of the titanic seven-time, Grammy-winning singer/songwriter’s personal collection of signature wardrobe, guitars, memorabilia and more items related to his iconography as part of their two day MUSIC ICONS auction taking place on May 18 with Prince and historical items by other music legends (to be announced later) on May 19 live in New York at the Hard Rock Cafe and online. (photo top left: Prince’s Schecter "White Cloud" electric guitar, bottom left: Under the Cherry Moon ensemble and bottom right: red jumpsuit)

Born Prince Rogers Nelson in 1958 in Minneapolis, Minnesota and known around the world by his first name and later only a symbol, the one and only Prince’s music career 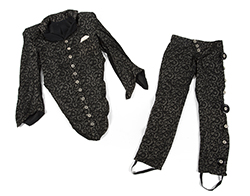 and extraordinary, unique gifts as a recording artist have immortalized him into the ranks of Elvis Presley, Michael Jackson, Madonna and The Beatles as one of pop music’s greatest icons. A musical prodigy and 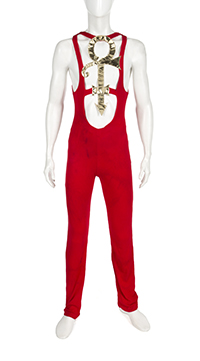 multi-instrumentalist by his early teens, an 18-year-old Prince signed his first record deal with Warner Bros. Records with a stipulation to self-produce his own recordings, demonstrating an unwavering adherence to artist control that he pioneered and would carry with him throughout his 40-year career. His early music from his first albums For You (1978) and Prince (1979) featuring his first major hit single “ I Wanna Be Your Lover” displayed flashes of his sensuality and charisma that would shape the contours of his music and image in the 80s and beyond. With his breakthrough hit album 1999 (1982) that produced the mega hits, “Little Red Corvette,” “Delirious” and the album’s title track, the Purple One innovated the electric “Minneapolis sound” of synth-pop and funk rock that would dominate and define that decade’s airwaves and influence other pop music artists. However, it was his next album Purple Rain (1984) that catapulted him to superstardom. Purple Rain also became a hit motion picture starring Prince that debuted his iconic mixed race and mixed gender band, The Revolution, featuring the duo Wendy & Lisa, drummer Bobby Z. and others, showcasing Prince and the Revolution’s electrifying performances, androgynous fashion style and daring sexuality. The album, containing some of Prince’s classics “When Doves Cry,” “Let’s Go Crazy,” “ I Would Die 4 U,” “Take Me With You,” and the album’s title track topped the charts at Number One for 24 weeks and sold more than 10 million copies. The album won Prince an Oscar for Original Song Score and is considered one of the greatest soundtracks of all time. Created out of his home studio Paisley Park in Minnesota, Prince’s universe extended to producing other hit making bands such as The Time, Vanity 6, Apollonia 6 and the Family and writing top 10 hits for artists including, Sheila E. (“The Glamorous Life,” 1984), Sheena Easton 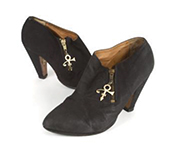 Throughout his career, Prince consistently proved to be a prolific artist, provocateur and visionary pushing the boundaries of sexuality, gender, genre and race while retaining creative control on his own terms and evolving musically and artistically in every recording and on tour. His live concerts and performances were legendary and displayed his showmanship as a singer, dancer and musician: from his opening performance for the Grammys in 2004 with Beyoncé that attracted 24 million viewers; to his powerful guitar solo in a group performance of “While My Guitar Gently Weeps” with Tom Petty, Steve Winwood, Jeff Lynne, Dhani Harrison and others posthumously inducting George Harrison into the Rock and Roll Hall of Fame that same year; to his spectacular Super Bowl halftime performance in 2007, among others. He released his most recent album HITnRUN: Phase Two in 2015 and in 2016, he embarked on the “Piano and A Microphone Tour,” which would be his final concerts, playing live intimate solo shows until his sudden and unexpected death later that year on April 21, 2016 at the age of 57, that shocked and saddened the entire world. He was inducted into the Rock and Roll Hall of Fame in 2004.

“Prince walks among the rock and roll legends who changed the world and the musical landscape with his incredible artistry and brilliance,” said Darren Julien, President/Chief Executive Officer of Julien’s Auctions. “Each piece in this dazzling collection celebrates the man, the music and the moments of an extraordinary and passionate artist whose distinct style and sound set him apart from all other music icons and made him a cultural phenomenon that we will most likely never see the likes of again.” 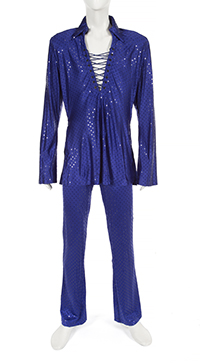 About Julien's Auctions
Julien's Auctions is the world record-breaking auction house to the stars. Collaborating with the famous and the exclusive, Julien's Auctions produces high profile auctions in the film, music, sports and art markets. Julien's Auctions has received international recognition for its unique and innovative auction events which attract thousands of collectors, investors, fans and enthusiasts from around the world. Julien's Auctions specializes in sales of iconic artifacts and notable collections including Marilyn Monroe, John Lennon, Ringo Starr, Lady Gaga, Banksy, Cher, Michael Jackson, U2, Barbra Streisand, Les Paul, Bob Hope, Elvis Presley, Frank Sinatra, Jimi Hendrix and many more. In 2016, Julien's Auctions received its second placement in the Guinness Book of World Records for the sale of the world's most expensive dress ever sold at auction, The Marilyn Monroe "Happy Birthday Mr. President" dress which sold for $4.8 million. Julien's Auctions achieved placement in the Guinness Book of World Records in 2009 for the sale of Michael Jackson's white glove which sold for $480,000 making it the most expensive glove ever sold at auction. Based in Los Angeles, Julien's Auctions has a global presence bringing their auctions and exhibitions to targeted destinations worldwide including London, New York, Las Vegas, Japan and China. Live auctions are presented for bidders on-site and online via live streaming video and mobile technology. For more information, go to www.juliensauctions.com. Connect with Julien's Auctions at www.facebook.com/JuliensAuctions or www.twitter.com/JuliensAuctions or www.instagram.com/juliens_auctions.