NASCAR Star’s "No. 43" Joins Winners Circle of
Property from the Collection of "The King" Richard Petty Auction Event
at Planet Hollywood Resort and Casino in Las Vegas 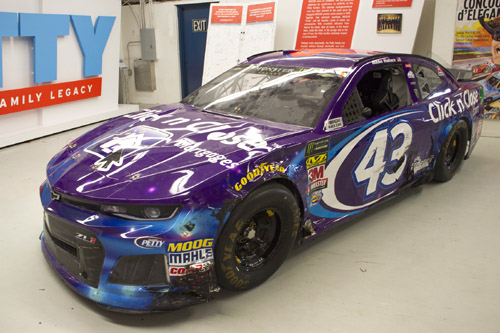 On February 18, 2018, driver Darrell "Bubba" Wallace Jr. cruised the purple No. 43 Click n’Close Chevrolet Camaro ZL1 to his team Richard Petty Motorsports’ best finish since 2016 in NASCAR’s most important and iconic race –the Daytona 500 –finishing second as well as making history. In his first Daytona 500, Wallace’s race made him the second highest finishing rookie ever in their Daytona 500 debut and captured the highest finish for an African–American driver in the 60–year history of the Great American Race. Wallace is the first full–time African–American driver on the circuit in 47 years since Wendell Scott.

At the age of nine, the Mobile, Alabama native started racing in the Bandolero and Legends car racing series. In 2005, he won 35 of the Bandolero Series’ 48 races held that year and in 2008 became the youngest driver ever to win at Franklin County Speedway in Virginia at the age of 14. In 2017, Wallace was named Richard Petty Motorsports full time driver of "The King’s" iconic "No. 43," Richard Petty’s trademark number in an illustrious career that brought him a record number 200 career race wins, over 700 top 10s in 1,184 starts, seven Daytona 500 wins and seven NASCAR Championships and crowned him as the most decorated driver in NASCAR history. This historic car is signed by Wallace himself and estimated to sell between $70,000 – $90,000.

"This car is always going to be special to me. It was my first Daytona 500 and was such an emotional race being the first full–time African–American driver in NASCAR since Wendell Scott,’ said Darrell "Bubba" Wallace Jr. "This car was the best place for me to be. It was an amazing day with this car."

"Julien’s Auctions is thrilled to offer this legendary car driven by NASCAR’s next generation of champions, Darrell "Bubba" Wallace Jr.," said Darren Julien, President/Chief Executive Officer of Julien’s Auctions. "This special car has made its way into the books of NASCAR history and rightfully belongs in the Victory Lane of "The King" Richard Petty’s collection of championship cars, trophies and motorsports memorabilia to be offered at auction." 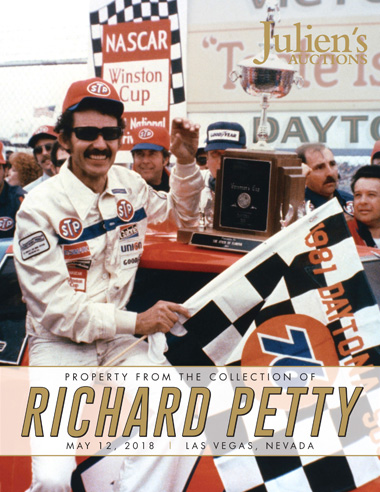 LIVE AND ONLINE AUCTION
Saturday, May 12th, 2018
Property from the Collection of Richard Petty
Session I: 1:00 p.m. PST

About Julien’s Auctions
Julien’s Auctions is the world record-breaking auction house to the stars. Collaborating with the famous and the exclusive, Julien’s Auctions produces high profile auctions in the film, music, sports and art markets. Julien’s Auctions has received international recognition for its unique and innovative auction events which attract thousands of collectors, investors, fans and enthusiasts from around the world. Julien’s Auctions specializes in sales of iconic artifacts and notable collections including Marilyn Monroe, John Lennon, Ringo Starr, Lady Gaga, Banksy, Cher, Michael Jackson, U2, Barbra Streisand, Les Paul, Bob Hope, Elvis Presley, Frank Sinatra, Jimi Hendrix and many more. In 2016, Julien’s Auctions received its second placement in the Guinness Book of World Records for the sale of the world's most expensive dress ever sold at auction, The Marilyn Monroe "Happy Birthday Mr. President" dress which sold for $4.8 million. Julien’s Auctions achieved placement in the Guinness Book of World Records in 2009 for the sale of Michael Jackson’s white glove which sold for $480,000 making it the most expensive glove ever sold at auction. Based in Los Angeles, Julien’s Auctions has a global presence bringing their auctions and exhibitions to targeted destinations worldwide including London, New York, Las Vegas, Japan and China. Live auctions are presented for bidders on-site and online via live streaming video and mobile technology. For more information, go to www.juliensauctions.com. Connect with Julien’s Auctions at www.facebook.com/JuliensAuctions or www.twitter.com/JuliensAuctions or www.instagram.com/juliens_auctions.