The Most Significant Sports Auction in History

Beverly Hills, California – (March 10, 2016) – Julien’s Auctions, the world record breaking auction house to the stars, has announced what many believe to be the most important sports auction in history — Pelé: THE COLLECTION. The three-time World Cup Champion, FIFA Player of the Century and Brazilian Football icon will offer his vast collection of memorabilia, awards, personal property and iconic items from his entire career for the first time ever. 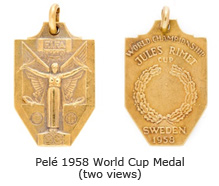 The collection, which includes over 2,000 items, will be featured in a three-day auction in London through Julien’s Auctions. Pelé is considered to be the most important football player of all time and has often been referred to as “Soccer’s National Treasure.” The three-time World Cup Champion, FIFA Player of the Century (1999) and Brazilian Football legend became a superstar with his performance in the 1958 World Cup. He holds the record as the youngest player to ever play in, and score in, a World Cup Final and holds the Guinness World Record for goals scored in a career with 1,283. 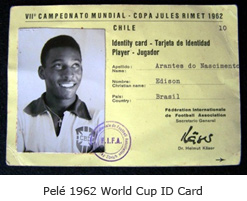 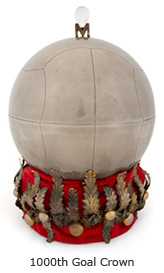 Pelé grew up in poverty but still developed his talent for soccer by kicking a rolled-up sock stuffed with rags around the streets of Bauru. 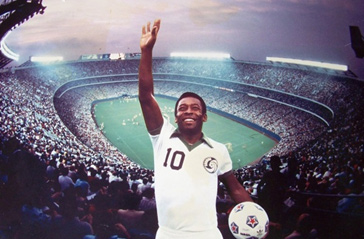 Pelé joined his first professional soccer club, Santos FC, at the age of 15 and scored his first professional career goal, in his first professional game, on September 7, 1956, over a month before his 16th birthday. The young phenomenon led the league in goals scored during his first full season and was immediately recruited to play for the Brazilian national team. This is where the legend began. The story of Pelé will be told in a major Hollywood biopic produced by Oscar-winning producers Imagine Entertainment.  The film will premiere in New York on April 23, 2016. 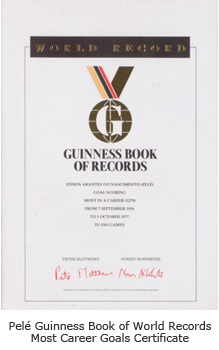 This global sports icon known to the world as Pelé won the World Cup in 1958, 1962 and 1970. Although just 5’ 8” tall, Pelé was a giant on the field leading his Brazilian team Santos FC to many championships. Pelé led his Santos team to two South American championships in the Copa Libertadores, and five consecutive Brazilian national championships in the Taça Brasil. Due in large part to Pelé’s efforts, Brazil was granted permanent possession of the World Cup’s Jules Rimet Trophy after their third victory in 1970. It was a true tribute to his ultimate dominance in the sport, leading to his influence remaining powerful among today’s modern day football stars. 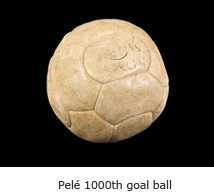 Pelé: The Collection is unprecedented and extraordinary. It covers every stage of his career — both personal and professional. The collection offers a story of sorts from his signing with Santos FC in 1956 at the age of 15 all the way through his post-career humanitarian efforts and being named Santos FC’s Lifetime Global Ambassador for the club in December 2014. 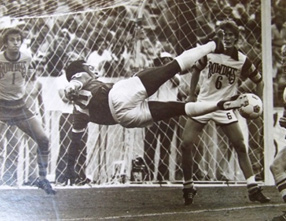 The legacy of Pelé is unmatched.  From his very beginning in youth football to his storied career and then his post-career humanitarian efforts, Pelé remains the most influential soccer player of our time and the most famous name to ever play the sport of football. 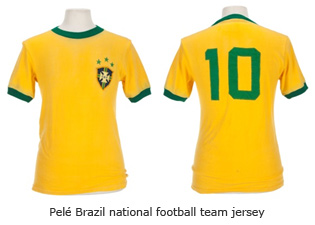 “Having donated a significant portion of my collection to the City of Santos, I have decided to allow fans and collectors to own a piece of my history as well.  I hope they treasure these artifacts and share my story with their children and generations to come.  I will also be donating a portion of the proceeds from the auction to Pequeno Principe, the largest pediatric hospital in Brazil.”

All of the property in the auction will be featured in a full color three catalog limited edition box set available for purchase at www.juliensauctions.com for $300 USD.  A limited number of 500 special edition collectors box sets will be signed by Pelé for the price of $1,000 each with proceeds benefiting Pelé’s Children’s Hospital, Pequeno Príncipe.

About Julien's Auctions
Julien's Auctions is the Auction House to the Stars. Collaborating with the famous and the exclusive, Julien's Auctions produces high profile auctions from the world of entertainment, Rock n' Roll, sports and art. Founded by Darren Julien, Julien's Auctions has achieved international recognition for its extraordinary auction events which attract thousands of collectors, investors, fans and enthusiasts from around the world. Julien's Auctions specializes in auctioning iconic artifacts and notable collections from the world's most recognizable stars including Marilyn Monroe, John Lennon, Ringo Starr, Lady Gaga, Banksy, Cher, Michael Jackson, U2, Barbra Streisand, Larry Hagman, Les Paul, Bob Hope, Elvis Presley, Frank Sinatra, Jimi Hendrix and many more. Each auction is beautifully documented in a collectible high gloss auction catalog uniquely capturing the story of the collection and photographs of each treasure. Based in Beverly Hills, Julien's Auctions has an international presence and is featured widely in the press both domestically and internationally while bringing their exhibitions and auctions to destinations worldwide including London, New York, Las Vegas, Japan and China. Live auctions are presented for bidders on-site and online via live streaming video, by phone and by text. Darren Julien, Founder & CEO, and Martin Nolan, Executive Director, head up the organization and together have led the renowned auction house to world record breaking auction results. The auction house has offices in Beverly Hills, London, England and New York. For more information, go to www.juliensauctions.com.