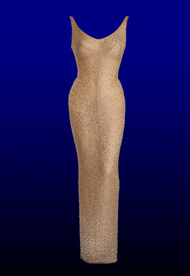 Los Angeles, California – Julien’s Auctions, the world-record breaking auction house to the stars is now in the Guinness Book of World Records for the second time, having sold the most expensive dress ever to be auctioned. The Marilyn Monroe “Happy Birthday Mr. President” dress worn by Monroe on Saturday, May 19, 1962, at a Democratic fundraiser and early 45th birthday celebration for President John F. Kennedy at Madison Square Garden, was sold by Julien’s Auctions on November 17th, 2016 in Los Angeles for $4.81 million. The dress was sold to Ripley’s Believe it or Not and surpassed all other records for a dress sold at auction. Julien’s Auctions is also in the Guinness Book of World Records for selling Michael Jackson’s white glove for $420,000 in 2009, making it the most expensive glove ever sold at auction.

Under a bright spotlight, the legendary Marilyn Monroe walked on stage and peeled away her white ermine fur coat, revealing a skintight, sheer flesh-colored dress that sparkled with over 2,500 handstitched crystals.  The custom Jean Louis creation was so tight fitting that Marilyn wore nothing underneath and had to be sewn into it at the last minute. When Marilyn appeared and the dress was finally revealed, the entire audience gasped.

“Wow, what an honor and such exciting news,” said Darren Julien, President & CEO of Julien’s Auctions. “We never imagined we would be in the Guinness Book of World Records again and I must say it is pretty amazing. We owe a great deal of gratitude to the many people who have trusted us throughout the years with their personal and career items. Can’t wait to do it all over again in 2017.”

“Marilyn Monroe’s dress was one of the most exciting moments in our auction house’s history. I am thrilled that this was the dress that broke all records and now has a place in the Guinness Book of World Records,” said Martin Nolan, Executive Director of Julien’s Auctions. “I am so very proud to be able to have our name in the record books alongside such an enduring and timeless beauty as Marilyn.”

About Julien's Auctions
Julien's Auctions is the world-record breaking Auction House to the Stars. Collaborating with the famous and the exclusive, Julien's Auctions produces high profile auctions from the world of entertainment, Rock n’ Roll, sports and art. Founded by Darren Julien, Julien's Auctions has achieved international recognition for its extraordinary auction events which attract thousands of collectors, investors, fans and enthusiasts from around the world. Julien's Auctions specializes in auctioning iconic artifacts and notable collections from the world's most recognizable stars including Marilyn Monroe, John Lennon, Ringo Starr, Jane Fonda, Lady Gaga, Banksy, Cher, Michael Jackson, U2, Barbra Streisand, Larry Hagman, Les Paul, Bob Hope, Elvis Presley, Frank Sinatra, Jimi Hendrix and many more. In 2016, Julien’s Auctions achieved placement in the Guinness Book of World Records for the sale of the world’s most expensive dress, Marilyn Monroe’s “Happy Birthday Mr. President” dress which sold for $4.81 million. Each auction is beautifully documented in a collectible high gloss auction catalog uniquely capturing the story of the collection and photographs of each treasure. Based in Los Angeles, Julien's Auctions has an international presence and is featured widely in the press both domestically and internationally while bringing their exhibitions and auctions to destinations worldwide including London, New York, Las Vegas, Japan and China. Live auctions are presented for bidders on-site and online via live streaming video, by phone and by text. Darren Julien, Founder & CEO, and Martin Nolan, Executive Director, head up the organization and together have led the renowned auction house to world record breaking auction results. For more information, visit www.juliensauctions.com.