Personal Items and Career Memorabilia from the Innovative Musical Genius and his Trailblazer Wife to Be Offered during Icons & Idols: Rock n’ Roll 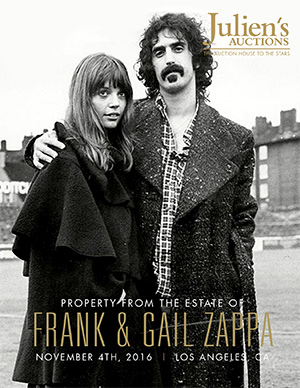 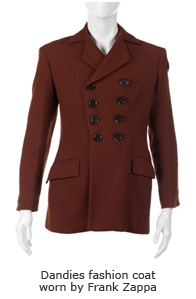 Los Angeles, California – (August 8, 2016) –Julien’s Auctions, the world-record breaking auction house to the stars, has announced Property from the Estate of Frank and Gail Zappa Auction which will take place during the Icons & Idols: Rock n’ Roll 2016 auction on Friday, November 4, 2016.

The legendary Frank Zappa’s (1940-1993) career spanned over 30 years. As a music composer, producer, director and guitarist, he would fuse musical genres and incorporate diverse musical techniques and sounds, some often politically charged and intentionally shocking.  Often described as a genius, Frank Zappa was undeniably one of the most innovative musicians of the 20th century. He led the sixties California freak movement, composed classical compositions throughout his career, was a hero of free speech and spoke out against censorship often in public. 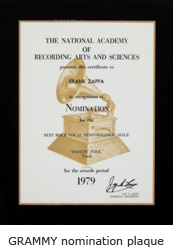 In 1967, Frank married Gail Zappa and purchased a home in Laurel Canyon in Los Angeles, California. The compound was complete with a home studio that he named Utility Muffin Research Kitchen. Zappa made over 60 albums during his career and toured the world for decades. Frank and Gail had four children — Moon, Dweezil, Ahmet and Diva. Gail was a strong supporter of artists’ rights and an animal activist.

Zappa was a pioneer in sound and recording techniques. A true innovator. He created unique and extraordinary compositions. He was a musical master and considered to be one of the greatest guitarists to walk the earth.

“Music, in performance, is a type of sculpture. The air in the performance is sculpted into something.” – Frank Zappa 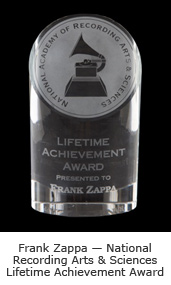 During the Zappas’ decades of touring the globe, they amassed a collection of exotic furnishings, fine antiques, salvaged architectural pieces, unique collectibles and whimsical items that appealed to their panache for colorful and non-conformist eye. The Property from the Estate of Frank and Gail Zappa auction will include many of the personal treasures that found their home at the fabled compound in California. These include a Venetian gilt metal chandelier (Estimate: $10,000-$15,000); an Italian Baroque console table (Estimate: $2,000-$4,000); and a carved gilt wood bookcase (Estimate: $1,500-$2,500). Contemporary fine art to be offered includes a still life by John Alexander (Estimate: $3,000-$5,000); a nail relief sculpture by Robert Harley (Estimate: $5,000-10,000); and a large painting by Ashley Laurence titled “Angel Pig,” a name given by Gail Zappa (Estimate: $3,000-$5,000). 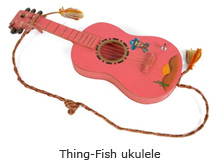 Colorful and personalized home décor including a monumental chandelier festooned with Christmas and other ornaments that was the focal feature of the kitchen where the family often convened, a hand painted dining table and chairs (estimate: $1,000-$2,000), and a pair of Southeast Asian papier maché tigers (Estimate: $600-$800) will also be offered.  Gail Zappa’s love of animals and birds was artfully incorporated all over their home. Many of the items being offered include this theme as well as a repeating pumpkin theme.

Vintage housewares and furnishings were combined and displayed with found objects, collectible toys, exotic trinkets, unique textiles, and memorabilia to create a riot of color and personality. Many of the items in the auction will be sold in the exact grouping as Frank and Gail Zappa had them in the house. 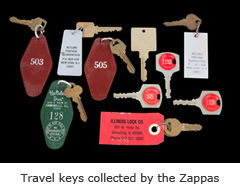 The auction also includes memorabilia and personal items that document and celebrate the career of Frank Zappa and his love story with Gail. This includes a Dandies Fashions coat worn by Frank Zappa on the July 20, 1968 cover of Rolling Stone magazine (Estimate: $1,000-$2,000); a purple ribbed turtleneck worn by Frank Zappa in 200 Motels (United Artists, 1971) (Estimate: $600-$800); a stage worn vest that Zappa also wore on the back cover of the 1972 album Waka Jawaka; a collection of career related awards presented to Frank Zappa including various Gold records, a National Academy of Recording Arts and Sciences Lifetime Achievement Award, and a GRAMMY® nomination plaque; a clay Thing-Fish model, a ukulele featured on the Thing-Fish album cover; and a collection of hotel keys collected by Frank and Gail in their travels (Estimates: Various).

Throughout his career, Zappa took music to places rarely trafficked. In an interview with The Times UK in 2013, Gail Zappa put it this way: when she first met him in 1966, his group, the Mothers of Invention, was “the LA band,” the real deal. “There were others — the Byrds and the Doors and all that. But the real guys? It was the Mothers. Because they did stuff nobody else did, and they said things no one else would dare say.” That is part of the Frank Zappa legacy.

About Julien's Auctions
Julien's Auctions is the World-Record Breaking Auction House to the Stars. Collaborating with the famous and the exclusive, Julien's Auctions produces high profile auctions from the world of entertainment, Rock n' Roll, sports and art. Founded by Darren Julien, Julien's Auctions has achieved international recognition for its extraordinary auction events which attract thousands of collectors, investors, fans and enthusiasts from around the world. Julien's Auctions specializes in auctioning iconic artifacts and notable collections from the world's most recognizable stars including Marilyn Monroe, John Lennon, Ringo Starr, Lady Gaga, Banksy, Cher, Michael Jackson, U2, Barbra Streisand, Larry Hagman, Les Paul, Bob Hope, Elvis Presley, Frank Sinatra, Jimi Hendrix and many more. Each auction is beautifully documented in a collectible high gloss auction catalog uniquely capturing the story of the collection and photographs of each treasure. Based in Los Angeles, Julien's Auctions has an international presence and is featured widely in the press both domestically and internationally while bringing their exhibitions and auctions to destinations worldwide including London, New York, Las Vegas, Japan and China. Live auctions are presented for bidders on-site and online via live streaming video, by phone and by text. Darren Julien, Founder & CEO, and Martin Nolan, Executive Director, head up the organization and together have led the renowned auction house to world record breaking auction results. For more information, go to www.juliensauctions.com.