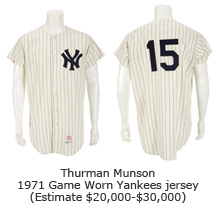 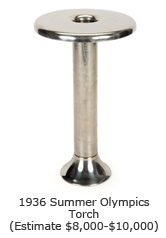 Other sports highlights of this exclusive internet auction include a torch used in the 1936 Summer Olympics torch relay. The 1936 Summer Olympics torch relay was the first of its kind, following the reintroduction of the Olympic flame at the 1928 Games. It pioneered the modern convention of moving the flame via a relay system from Greece to the Olympic venue. While there were many torches produced at the time for the 1936 relay, many were eventually melted down to be used for supplies for World War II. This torch was used by a torchbearer in the relay who hailed from the Greek town of Larissa in central Greece. 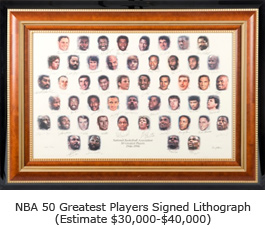 Also highlighted is Pele’s Brazil National Football Team game worn soccer jersey. The 1970 Brazil National Football Team would win the country’s third FIFA World Cup title in 1970, with the team being recognized as one of the greatest teams in World Cup History. Pele has also been recognized as the greatest soccer player in the history of the sport. Other professional soccer game worn jerseys from soccer legends Zico, Socrates, Ronaldo, Diego Maradona, Lionel Messi and Cristiano Ronaldo will also be included.

AUCTION LOCATION
Online only at http://julienslive.com

Registering to Bid
Registration is required to bid in this online auction and can be done online at JuliensLive.com/signup/, or by calling (310) 836-1818.

Placing Bids
There is one way to bid in this sale: