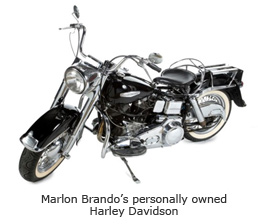 Beverly Hills, California – (June 23, 2015) – Nothing personifies the meaning of a pure leading male legendary screen icon as that of Marlon Brando. The movie star best known for his enigmatic roles in “The Wild One,” “The Godfather” and “A Streetcar Named Desire,” to name only a few, was the epitome of sought after movie star, Hollywood bad boy and misunderstood but admired screen god. On Saturday, June 27, 2015, fans and collectors will have a once-in-a-lifetime chance to bid on Marlon Brando’s personally owned Harley Davidson at Julien’s Auctions Beverly Hills (Lot #791, Estimate: $200,000-$400,000).

Marlon Brando’s image on a motorcycle was established with his role as Johnny Strabler in The Wild One (Columbia, 1953). The image of a strapping young Brando sitting on that motorcycle is famous not only for its imagery but for the personification of attitude and importance Brando established for himself in Hollywood history. The motorcycle being offered is accompanied by the original State of California Department of Motor Vehicles Notice of Transfer from Los Angeles Harley Davidson. The Harley Davidson FLH Electra-Glide motorcycle was purchased by Brando in 1970. This Harley-Davidson could be the only Brando motorcycle available.

Other celebrity motorcycles which have recently sold at auction include the Jerry Lee Lewis Harley Davidson (Sold for $385,000) and Buddy Holly’s motorcycle (Sold for $450,000), offering a glimpse into the collectability of celebrity cycles including this one owned by “The Godfather” himself.

Marlon Brando once said “It still pleases me to be awake during the dark, early hours before morning when everyone else is still asleep. I’ve been that way since I first moved to New York. I do my best thinking and writing then. During those early years in New York, I often got on my motorcycle in the middle of the night and went for a ride anyplace. There wasn’t much crime in the city then, and if you owned a motorcycle, you left it outside your apartment and in the morning it was still there. It was wonderful on summer nights to cruise around the city at one, two, three a.m. wearing jeans and just a t-shirt with a girl on the seat behind me. If I didn’t start out with one, I’d find one.”

Interested collectors and media can view the Marlon Brando 1969 Harley-Davidson this week at Julien’s Auctions Beverly Hills gallery located at 9665 Wilshire Boulevard across from Saks Fifth Avenue. Marlon would often ride for miles on end on desert roads in the American Southwest. One can only imagine the thoughts and ideas that came to Brando on such solitary trips throughout his celebrated career.