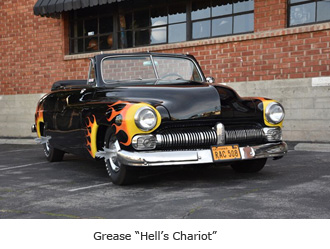 “Grease” is the word and this sale is worth its own list of credits as the amazing car collection also includes the Grease Hell’s Chariot Custom Convertible. The 1949 Mercury Series 9CM custom convertible featured throughout the motion picture “Grease” (Paramount, 1978) was nicknamed “Hell’s Chariot.” The Merc was originally built and customized by Eddie Paul of Customs by Eddie Paul to create the Scorpions gang’s signature convertible. The film culminates with John Travolta’s character, Danny, racing against Hell’s Chariot, driven by his nemesis, “Craterface,” the leader of the Scorpions gang played by Dennis Stewart. Hell’s Chariot lines up with Danny in the dry riverbed of the Los Angeles River in downtown L.A. to begin their race. Hell’s Chariot dishes out damage, rear ending Travolta’s car and cutting into its side with the Chariot’s razor hubcaps. Despite the abuse Travolta’s car endures by Hell’s Chariot, he wins the day, the car, and the girl, Sandy, played by Olivia Newton-John. Signed on the dashboard by Newton-John Estimate: $400,000-$600,000). 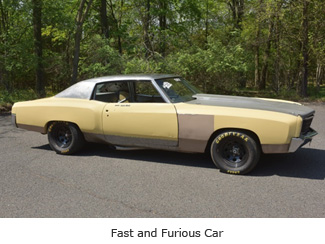 A mustard yellow 1970 Chevrolet Monte Carlo used in “The Fast and the Furious Tokyo Drift” (Universal film, 2006) and signed by the car builder, Dennis McCarthy, will also be offered. The car has “Tokyo Drift,” “Universal Hollywood” and “Year One” decal stickers on the front window. It also has a “Driver: Lucas Black” sticker on the side. There are also bullet holes on the sides and a baseball lodged in the back window (Estimate: $50,000-$70,000).

Other revved-up highlights of the sale include a black 2005 Ducati Multistrada DS1000 belonging to action film star Bruce Willis. The motorcycle has a 992cc air-cooled 90-V twin engine with manual transmission. Willis purchased the motorcycle brand new and has put approximately 290 miles on it (Estimate: $40,000-$60,000). Also to be offered is a Nicolas Cage Hellcat used while filming “Gone in Sixty Seconds.” The 1999 Confederate Hellcat custom-built motorcycle was ridden by Cage in the film and the actor signed “Nic Cage” on the gas tank in gold marker. Confederate is an exclusive motorcycle company and there are only 500 first generation Hellcat models in existence (Estimate: $40,000-$60,000). 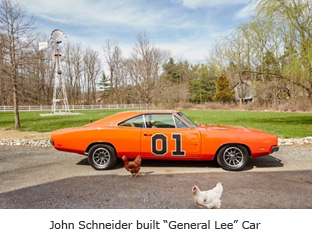 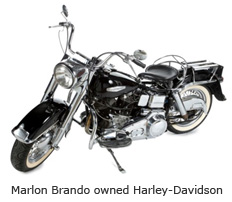 Schneider built four such cars and this is one of them accompanied by a letter of authenticity signed by Schneider stating the he built and owned the car. The car has been featured in Mopar Collector’s Guide magazine which states that this particular car appeared in several of Schneider’s commercials and starred in his film “Behind the Scenes with Bo” (Estimate: $200,000-$300,000).

Nothing evokes Hollywood royalty or a sense of honor and masculinity than the name Marlon Brando. His Harley-Davidson FLH Electra-Glide motorcycle purchased by Brando in 1970 shows 13,859 miles and is black. Marlon Brando’s image as a rebel on a motorcycle was established with his role as Johnny Strabler in “The Wild One” (Columbia, 1953). Marlon Brando was quoted as saying “I often got on my motorcycle in New York in the middle of the night and went for a ride — anyplace.” 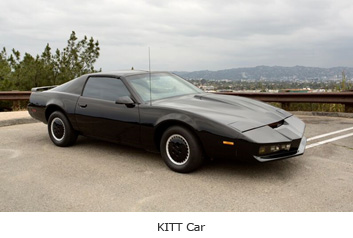 The sale also includes the KITT car from the original hit television series “Knight Rider” starring David Hasselhoff. The T-top TransAm has a keyless ignition system and studio-created instruments, controls, monitors and steering wheel that outfit the dashboard. KITT’s signature red light scanning sensor on the hood is operated from inside the vehicle. The car was registered to Universal City Studios in May 1984. KITT is accompanied by a group of studio call sheets and maps indicating the vehicle was used and which cast members were present. The NBC television series “Knight Rider” (NBC 1982-1986) starred David Hasselhoff who shared the screen with the unusual co-star, a Pontiac TransAm voiced by William Daniels and named KITT. KITT is an acronym for Knight Industries Two-Thousand. The intelligent vehicle drove itself at times and with its high tech features it always assisted its star character, Michael Knight. The car is in working order (Estimate: $200,000-$300,000).

The collection of rare Hollywood vehicles will be offered during the Julien's Auctions Hollywood Legends auction to be held June 26-27, 2015 in Beverly Hills.