JULIEN'S AUCTIONS ANNOUNCES PROPERTY
FROM THE ESTATE OF DOM DELUISE

Beverly Hills, California - (June 1, 2015) - Julien's Auctions, the auction house to the stars, announces the Property from the Estate of Dom DeLuise auction to take place at Julien's Auctions Beverly Hills gallery on June 26-27, 2015 during the highly anticipated Hollywood Legends auction. The collection includes memorabilia, costumes, jewelry, a vast collection of fine art and furnishings from the famous actor, comedian and author who was loved by legions of fans worldwide.The auction will also feature items from his wife, Carol Arthur DeLuise and his sons Peter, Michael, and David DeLuise. 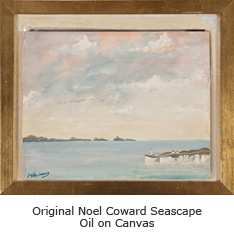 Dom DeLuise was a New York stage trained actor and stellar comedian loved by many. He was featured in some of Hollywood’s most popular and comedic motion pictures and television shows. He first found wide fame during his collaborations with Mel Brooks and his enduring cinematic and personal friendship with Burt Reynolds. Some of his most memorable films include “Silent Movie,” “History of the World Part I” and “Blazing Saddles.”He even supplied the voice for the character of Pizza the Hutt in the cult comedy hit “Spaceballs.” In his varied career he also lent his voice to numerous animated characters, wrote a number of children’s books, and became a celebrated chef with three cookbooks to his name. This auction features selected items from all phases of his career and throughout his life.

After meeting his wife Carol performing at summer theatre on the Eastern Seaboard in the mid-1960s, the couple collected and maintained fascinating art which they displayed in their family home. Regional artists represented include Arthur Long, Anne Wyeth McCoy, Claude Dern, and Dennis Park. Ara Dona, an artist supported by the DeLuises in his early career, is represented by numerous works in the auction. A highlight is his portrait of DeLuise (Estimate: $4,000-$6,000). Other featured fine art includes a seascape by Noel Coward (Estimate: $6,000-$8,000), a Hirschfeld original pen and ink portrait of DeLuise (Estimate: $6,000-$8,000) and a large painting by Scottish artist Alexander Goudie (Estimate: $3,000-$5,000). Dom's wife Carol and his son Michael DeLuise also have several fine pieces of art featured in the auction (Various Estimates range: $800-$1,200).

Burt Reynolds, a close friend of Dom DeLuise, was quoted as saying “Yes, every time I laugh.every time I smile and every time I think of the kindness from one actor to another, its Dom. It seems cliché these days to say someone is irreplaceable but for me, that’s Dom.”

Fans and collectors will find items from Dom DeLuise's famous friends, including such highlights as a grand piano said to have been owned by Vincent Price (Estimate: $6,000-$8,000), a set of cookware given to DeLuise by his good friend Anne Bancroft, wife of Mel Brooks (Estimate: $800-$1200), an extensive set of tableware pictured in DeLuise's cookbooks (Estimate: $800-$1,200), the set of original Derek Carter illustrations from one of DeLuise's childrens books (Estimate: $1,000-$2,000), a ladies' Rolex watch (Estimate: $4,000-$6,000) and many other pieces of jewelry, and ephemera from such friends as Burt Reynolds, Frank and Barbara Sinatra, and Phyllis Diller (all various estimates). 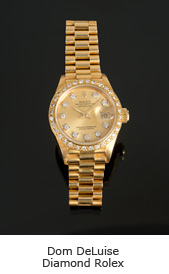 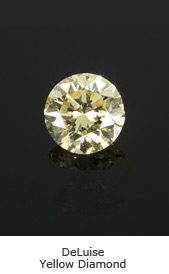 Other highlights include Dom DeLuise’s stage worn costumes and hats from his long career in Hollywood, including a cape and turban from his comedy stage act as “Dominick the Great” (Estimate: $2000-$3000), his trunk of magic tricks (Estimate: $1,000-$2,000), stage used sheet music (Estimate: $600-$800), and clown costumes worn on stage and in various television appearances including the production “Happy” (Estimate: $800-$1200).

All of the property in the auction is featured in a separate catalog accompanying the Hollywood Legends 2015 full color limited edition catalog available for purchase at www.juliensauctions.com. Items will also be featured online via the website. 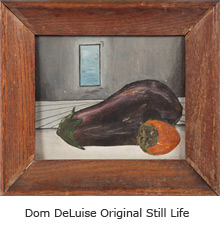