THE COLLECTION OF DAME JOAN COLLINS 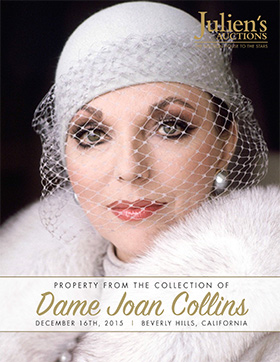 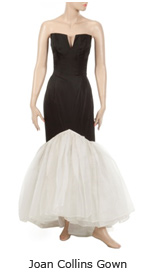 Beverly Hills, California – (September 21, 2015) – Julien’s Auctions, auction house to the stars, announces The Collection of Dame Joan Collins, an exquisite collection of fashion, jewelry, decorative arts and personal items representing her life and career. Joan Collins, first and foremost, is an actress but she is also a best-selling author, an accomplished producer and a successful entrepreneur. Nominated for an Emmy Award and winner of a Golden Globe Award and People’s Choice Award, as well as numerous other awards worldwide, Collins has appeared in more than 60 films and dozens of television programs.

When Alexis Carrington appeared on the hit primetime television drama, “Dynasty,” women from all over the world dreamed of being her and living the life of luxury and high stakes as only Carrington could have lived. It was Dame Joan Collins who brought the cunning and beautiful Alexis to life on the screen from 1981 to its end in 1989. The ABC award-winning drama featured Joan Collins alongside John Forsythe, Linda Evans and others. 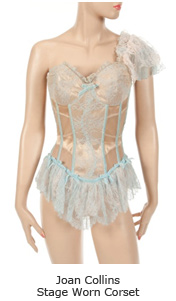 The tale of Colorado oil tycoon Blake Carrington and the women he loved and wronged captivated America each week for eight years. The show was also nominated every year for a Golden Globe Award for Best TV Drama.

Collins won the Golden Globe in 1983 for her role in the show. 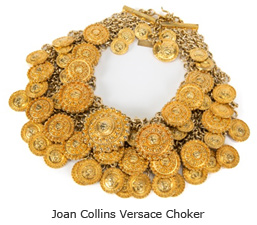 The legendary Collins has worked aside some of Hollywood’s most popular stars including Elizabeth Taylor, Richard Burton, Bette Davis, Paul Newman, Gregory Peck, Kirk Douglas and numerous others. Some of her most memorable films include “The Girl in The Red Velvet Swing,” “Rally Round the Flag Boys,” and “The Virgin Queen.”  Her work in television has included TV shows such as “Starsky & Hutch,” “Mission Impossible,” “Love Boat” and “The Man from U.N.C.L.E.” just to name a few. Since Joan made her stage debut at the age of nine and signed her first film contract at the age of 16, she has gone on to become one of the most iconic and recognizable Hollywood stars of our time. 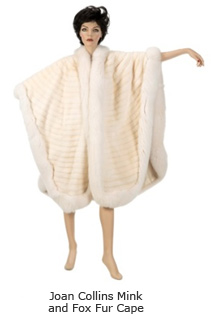 Highlights from The Collection of Dame Joan Collins include outstanding couture dresses from the 1960s, costumes, designer fashions and accessories, jewelry, career memorabilia, decorative art, furniture and personal items. These highlights include two vintage Louis Vuitton steamer trunks, a 1961 beaded event worn couture dress, a couture halter dress worn to the “Doctor Doolittle” premiere, costumes from “Dynasty” including event worn gowns designed by Nolan Miller, a custom made white fox and mink cape designed by furrier Edward Lowell, a collection of costume jewelry dating from the 1960s to present and a gold perfume bottle gifted to Collins from Natalie Wood and Robert Wagner. Other highlights include furnishings and many personal items.

Collins is also a tireless humanitarian and patron of worldwide charities including the International Foundation for Children with Learning Disabilities, The Shooting Star/Chase charity and others. In 1997 Dame Joan Collins was appointed Officer of the Order of the British Empire (OBE) for her services to the Dramatic Arts and Dame Commander of the Order of the British Empire (DBE) in 2015 for her services to charity.

The Collection of Dame Joan Collins will be featured in a full-color collectible catalog. The catalog will be available at www.juliensauctions.com.