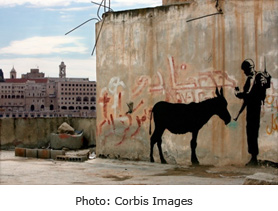 Beverly Hills, California – (July 29, 2015) – Julien’s Auctions, the auction house to the stars, has announced its annual Street Art Auction taking place September 30, 2015, in their Beverly Hills gallery located at 9665 Wilshire Boulevard. The auction will again offer a finely curated assortment of works produced by the most significant and collectible artists in the urban art movement. Highlighting the sale will be murals from Bethlehem and Detroit created by the illusive Banksy, the latter of which contains portions of paint showing clear fingerprints of the, until now, unidentified artist. 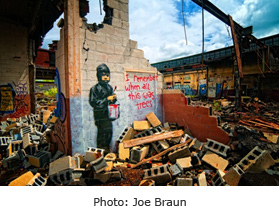 Headlining the auction is a rare large-scale mural by the notorious street artist Banksy titled “Donkey Documents” (Estimate: $400,000-$600,000) created in Bethlehem in 2007. The controversial mural depicts a donkey having its identification papers checked by an armed Israeli soldier, mocking the stringent security measures enforced by the Israeli Government. The piece is part of a series of works created by Banksy along the concrete barrier dividing the Palestinian West Bank from Israel and was made to promote his holiday fundraiser exhibition, “Santa’s Ghetto.” The work was posted by Banksy on his own website shortly after creation. The detached mural, measuring  7 feet  high by 10½ feet  long, is the largest and most significant intact Banksy mural in existence from his Israel visit and will be on display in London leading up to the sale. Banksy’s location choice, timing, and subject matter draw parallels with the donkey depicted in the well-known Biblical Christmas story who transported Mary into Bethlehem for the birth of Jesus. 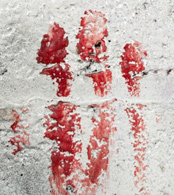 Also on offer is one of Banksy’s most poignant examples of American street art, “I Remember When All This Was Trees” (Estimate: $200,000-$400,000), a 7 feet by 7 feet four-color aerosol stencil and freehand figural work with text depicting a young boy holding a can of red paint and a brush. The boy, having just written the statement lamenting the loss of nature and deforestation, confronts the viewer directly with a deadpan expression.

The mural was fittingly executed on the wall of a derelict building at what was once the Packard automobile factory in Detroit, Michigan — now a wasteland of crumbling concrete, glass and steel, and a symbol of ongoing hardship and the negative effects of industrialization in the economically and socially mired city. Banksy created this work in 2010 just prior to the premiere of the documentary that would bring him to stardom, “Exit through the Gift Shop” (Paranoid Pictures, 2010). Fingerprints can clearly be seen on the red paint and are the only known examples of what may finally lead to the uncovering of the elusive artist’s identity. 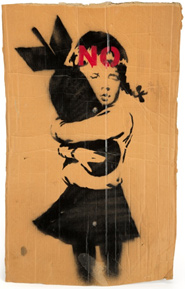 Also to be auctioned is Banksy’s “Bomb Hugger” (Estimate: $25,000-$35,000), a black and red aerosol stencil depicting a young girl hugging an aerial bomb. The work was sprayed onto a cardboard panel which was used as a placard during the International anti-war protests of 2003. A photograph of the owner shown holding the Banksy placard can be seen in an article about the protests published at the time in the Basingstoke Gazette.

All of the art on offer will be presented in a full-color Street Art Auction catalog available for purchase online at www.juliensauctions.com.

About Julien's Auctions
With expertise specializing in entertainment and music memorabilia, Julien’s Auctions has quickly established itself as the auction house to the stars. Julien’s Auctions presents exciting, professionally managed and extremely successful auctions with full color high quality auction catalogs unlike any other auction company and stars in the network primetime television series “Celebrity Home Raiders.” With media coverage spanning the globe and unprecedented marketing support, Julien’s Auctions has become known as the premier entertainment and celebrity memorabilia auction house worldwide.  Previous auctions include the collections of Cher, U2, Barbra Streisand, estate of Marilyn Monroe, the estate of Les Paul, Bette Midler and many more. Official website is www.juliensauctions.com or go to www.facebook.com/juliensauctions.