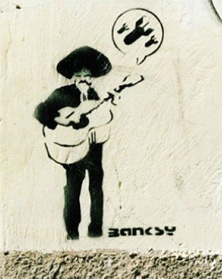 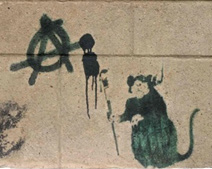 Last year Julien’s Auctions gave art collectors from around the globe the chance to bid on several highly-sought after Banksy art pieces including “Flower Girl” which sold for $219,000. Again, a number of original Banksy murals, including “Mariachi Player” (Est. $150,000-$200,000) will go to the auction block. This black aerosol stencil depicts a traditional Mariachi player singing with a speech bubble above him filled with bombs instead of music and signed Banksy. “Mariachi Player” was created by Banksy circa 2001 while touring in Mexico with a British Soccer club and is a very early example of what came to be known as his signature style. This particular mural is shown prominently in Banksy’s own book “Banging Your Head Against a Brick Wall. 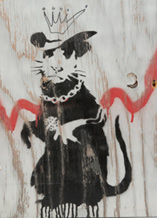 Also a selection of Banksy’s iconic Rat series stencils will be offered for sale including “Anarchy Rat,” (Est. $50,000-70,000). This three-foot black stencil painted on the stone wall of a military graveyard in Berlin-Mitte circa 2003/2004 features one of Banksy’s signature rats painting the symbol for anarchy. Banksy was in Berlin at the time participating in a “Backjumps” art exhibition and created many works throughout the city, most of which have since been destroyed. Instead of being scrubbed off or painted over, the Berlin City Council permitted this particular work to be expertly removed and preserved by a professional art conservator, prompting extensive national and regional media coverage. 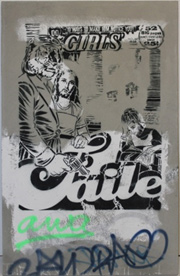 Other original Banksy murals include “Rapper Rat” (Est. $30,000-50,000), created in Banksy’s hometown of Bristol, and “Gangsta Rat” (Est. $20,000-40,000), an aerosol stencil on a British wheel clamp (car boot) depicting a rat wearing a New York Yankees baseball cap and carrying a vintage boom box.  Other stellar Banksy works include “Bomb Hugger” (Est. $3,000-5,000), a two-tone stencil on a cardboard placard featuring a young girl hugging an aerial bomb above the caption “NO.” The stencil was created by Banksy and carried in London during the international anti-war protest in February 2003 which is believed to have been the largest anti-war rally in history. 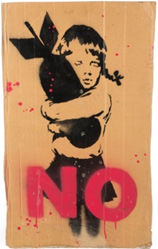 A number of other graffiti murals by recognized street artists will also be represented, including “10 Ways To Make Him Notice You” (Est. $8,000-$12,000) created in Berlin by the Faile collective, and “Graffiti is the Voice of The Dissatisfied Soul” (Est. $3,000-$5,000), an aerosol work painted live by Mear One during the “Style Wars” event at the Academy of Motion Picture Arts and Sciences. Other pivotal members of the urban art movement to be auctioned are Shepard Fairey, Retna, Risk, D*Face, Bambi, Alec Monopoly, Duce, Dcypher as well as pieces from the Con Art collection.

Julien's is also pleased to announce the sale of a musically inspired mural which was donated and presented on stage in New York City by grafitti artist Crash and HBO Latino to guitarist Carlos Santana during an HBO event marking the premiere of HBO Latino's pre-concert special, Santana: De Corazon as well as the release of his new album, Corazon. The piece is signed by both Crash and Santana, and the proceeds gained from the auction of the work will benefit Carlos Santana's Milagro Foundation charity.

Julien’s Auctions will host a preview leading up to the live auction at the Beverly Hills gallery on June 26th, 2014. 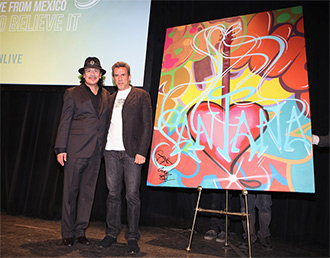 About Julien's Auctions
With expertise specializing in entertainment and sports memorabilia, Julien’s Auctions has quickly established itself as the premier auction house in high profile celebrity and entertainment auctions. Julien’s Auctions presents exciting, professionally managed and extremely successful auctions with full color high quality auction catalogs unlike any other auction company. Previous auctions include the collections of Cher, Michael Jackson, U2, Barbra Streisand, the estate of Marilyn Monroe and many more. Official website is www.juliensauctions.com. Julien’s Auctions is also the subject of the new Lifetime TV unscripted series “Celebrity Home Raiders.”