Beverly Hills, California….May 20, 2014….Julien’s Auctions, the world’s premier sports and entertainment memorabilia auction house, has announced an exclusive sports memorabilia online auction for sports enthusiasts. Sports fans and collectors from around the world have the opportunity to bid on memorabilia up until Monday, June 9, 2014 at 5:00 p.m. Pacific Time. The vast array of memorabilia includes a historic collection of items from one of the world’s largest and most comprehensive Muhammad Ali memorabilia collectors.  In addition, fans have the rare opportunity to bid on Carmelo Anthony’s 2004 Olympic Bronze medal, property from the life and career of Evander Holyfield and game worn items and memorabilia from sports icons that include Michael Jordan, Babe Ruth, Jerry Rice, Wayne Gretzky, Pele, Andre Agassi and more. Several game worn jerseys from Basketball, Baseball and Football legends are also included in the exclusive online auction.

Highlights from the collection of Muhammad Ali memorabilia include items from every stage of his career including rare programs and tickets from the 1959 Golden Gloves and 1960 Olympic Boxing Trials, items from the 1960 Rome Summer Olympics where Ali (Cassius Clay) won the Gold medal in the Light Heavyweight division, tickets and pennants from his early career and on-site programs. 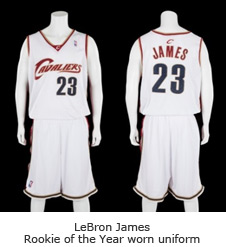 Fans and collectors can view the collection of memorabilia from Monday, June 2, 2014 to Saturday, June 7, 2014 at the Julien’s Auctions Beverly Hills gallery located at 9665 Wilshire Boulevard in Beverly Hills, California.  The exhibition will be open from 10:00 a.m. – 5:00 p.m. Pacific Time.

All bidding will take place online through Julien’s Live or by entering absentee bids.  Registering to bid can be done in person at the exhibition, online before the sale at the Julien’s Auctions Registration page to place absentee bids (go to the Registration page at http://www.juliensauctions.com/register.html and complete all requested information), online at Julien’s Live for bidding online (https://www.julienslive.com/signup/), or by calling (310) 836-1818.  For additional questions, interested bidders can call (310) 836-1818.

About Julien's Auctions
With expertise specializing in entertainment and sports memorabilia, Julien’s Auctions has quickly established itself as the premier auction house in high profile celebrity and entertainment auctions. Julien’s Auctions presents exciting, professionally managed and extremely successful auctions with full color high quality auction catalogs unlike any other auction company. Previous auctions include the collections of Cher, U2, Barbra Streisand, the estate of Marilyn Monroe and many more. Official website is www.juliensauctions.com. Julien’s Auctions is also the subject of the new Lifetime TV unscripted series “Celebrity Home Raiders.”