Beverly Hills, California – (November 26, 2014) – Julien’s Auctions, auction house to the stars, has announced an outstanding exclusive “Icons of Art” auction event to take place Monday, December 15th beginning at 10:00 a.m. at the Julien’s Auctions Beverly Hills gallery located at 9665 Wilshire Boulevard. The “Icons of Art” auction will include remarkable murals by the elusive artist Banksy from the interior walls of a Hollywood apartment, The Prominent Collection of Artwork by Ronnie Wood and several pieces of Modern Art by creative legend David Hockney. 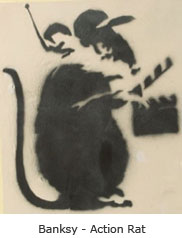 The unique Banksy offerings will include three stenciled rats all executed by Banksy on the interior walls of the Hollywood apartment Banksy crashed at during the run of his first Los Angeles gallery exhibition. Banksy traveled to Los Angeles for his first local gallery show, Existencilism, at the 33 1/3 Gallery in 2002. One of the iconic artworks from the apartment is featured in Banksy’s own book of his definitive works “Wall and Piece” (Century, UK, 2005). The published photograph shows the same “Graffiti Rat” (Est. $30,000-$50,000) with paintbrush in hand, having just scribbled a meandering black line across the kitchen wall.

In this same Hollywood apartment Banksy created several more original stencils from his Hollywood Rat Pack Series including: “Action Rat” (Est. $25,000-$35,000), depicting plump rat standing at attention with a film clapboard; and “Menace Rat” (Est. $25,000-$35,000), showing a smoking slender rat eagerly carving the ground below him with a metal saw. This set of three artworks, all executed at the same time inside Banksy’s temporary L.A. residence and subsequently documented in Banksy’s book, offer a unique opportunity for seasoned Banksy collectors. 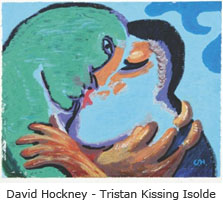 During the evening of unique art offerings, Julien’s Auctions will also offer approximately 30 pieces of art by David Hockney. The creative living legend, Hockney, was born and raised in England but chose Los Angeles as his home. His iconic paintings of swimming pools and L.A. interiors have become synonymous with the style and culture of Southern California. The collection will include important works relating to his theatre design projects including “Tristan Kissing Isolde,” a canvas painting created in conjunction with the designs he executed for the Los Angeles Opera’s production of “Tristan und Isolde” (Est. $15,000-$25,000). 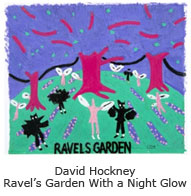 Other Hockney artworks to be offered include “Ravel’s Garden With a Night Glow” (Est. $15,000-$25,000). Hockney’s “Ravel’s Garden 3” recently sold at auction for $900,000 and is from the same series of original art. Hockney’s rare original photograph depicting acclaimed author Christopher Isherwood and his partner, artist Don Bachardy, which was taken in the couple’s Pacific Palisades living room, will also be on the auction block (Est. $2,000-$4,000). This photograph is believed to have been used by the artist as an aide-memoire leading to one of the most famous portraits of the 20th century, the simply titled “Christopher Isherwood and Don Bachardy.” 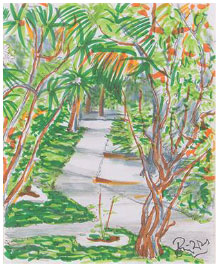 Like Bonnard, Picasso, Warhol and other artists before him, Hockney also was very fond of the Dachshund breed of dogs. A number of tributes representing his devotion to his small companions will also be offered (Estimates: $3,000-$5,000).

The sale will include stellar works by other artists, such as “Commanda” (Est. $13,000-$15,000) by Sephard Fairey; “Jack,” a rare portrait of Jack Nicholson created by leading guerilla artist Alex Monopoly consisting of a wheat paste sheet frenetically embellished with acrylic and aerosol (Est. $12,000-$14,000); “Seven Shark Show” (Est. $4,000-$6,000), a kaleidoscopic swirl of knife wielding women and gape-mouthed sharks created by the sought-after Shark Toof; “This USA Can’t Happen” (Est. $8,000-$12,000), a black aerosol stencil depicting “cowboy” Communist Kim Jong Un by the seminal female street artist Bambi, depicting Kim Jong Un riding a herd of missiles toward America, a political lambaste executed on an Oxford Street in London by the secretive artist Bambi, whom the press has branded the female Banksy. 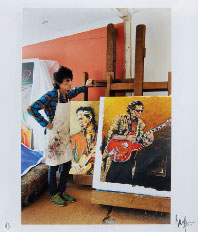 Also included are four works by the controversial artist Sabo in which celebrity liberals are criticized as “Obama Drones” (Est. $1,000-$2,000 each). Rene Gagnon, the veteran artist whom even Banksy felt was worthy copying, will also be promoted via his piece “Bomb Games” (Est. $2,000-$3,000), a dark scene depicting a pair of children playing catch with a bomb. Further highlighting the presentation will be works by Ron English, Blek Le Rat, Trust Icon, Annie Preece, Moncho 1929, Aero, Nuke, Elika Burns, Asylum, Thanks One, Louis Carreon, Jason Woodside and more. 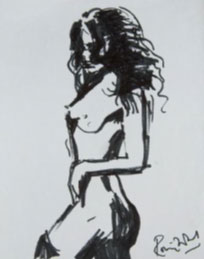 Ronnie Wood, best known as a member of the iconic band, The Rolling Stones, is also an accomplished artist. He has been working his way to becoming a very distinguished visual artist since before he was a famous musician. He often said that he found music a way to finance his art. At a recent New York gallery opening Wood was heard saying “I am a painter who happens to play guitar.” Wood received formal art training at Ealing College of Art and has continued painting, drawing and printmaking for over 35 years. His subjects range from self-portraits, musicians’ families, close friends, poems, landscapes and some random sketching. 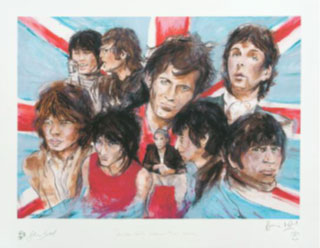 The collection of Ronnie Wood art, lyrics and memorabilia offered was meticulously gathered from around the world for many years. The sale is for the ultimate Ronnie Wood/Rolling Stones collector and includes many pieces that would never normally be available, let alone seen in public. There is a large selection of intimate sketches of family and friends and personal places. Many works are on hotel stationery or sketch book paper, simple ways to capture memories or ideas. There are working and rehearsal lyrics and notes, a glimpse into the mind of one of the world’s greatest rock stars. They are insightful working expressions of one of the most famous artist and musicians that has ever lived. The collection affords a rare opportunity for investment in Rock n’ Roll history.