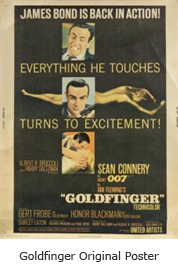 Beverly Hills, California – (December 2, 2014) – James Bond 007, the British film character, lady lover and masculine super icon of film will be featured at the Icons & Idols: Hollywood auction event at Julien’s Auctions in Beverly Hills on December 5 & 6, 2014. The Julien’s Auctions Beverly Hills gallery will feature memorabilia from the charismatic style of the James Bond character originally created by Ian Fleming in 1962. The James Bond 007 film series is the most successful film franchise in cinema history, spanning 52 years in film and 62 years in print. Eon Productions adapted Ian Fleming’s James Bond novels into 23 films. The novels have also been adapted into popular comic strips and video games. British secret service agent James Bond 007 has been portrayed by some of Hollywood’s most sought-after actors including Sean Connery, George Lazenby, Timothy Dalton, Roger Moore, Pierce Brosnan and Daniel Craig. Aside from the legendary props often taking center screen in the film, the James Bond film series celebrated extravagant vehicles. Both props and cars will be highlighted in the auction. 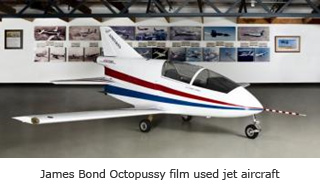 The Icons & Idols: Hollywood auction will feature three extraordinary vehicles from the James Bond film franchise. They include a jet aircraft used in the opening scene of the 1983 film Octopussy (Estimate: $200,000-$300,000) and listed in the Guinness Book of World Records as the lightest single engine jet in the world. The second vehicle to be auctioned is a hovercraft used in the 2002 film Die Another Day (Estimate: $30,000-$40,000). The third is a helicopter prop from the 1967 film You Only Live Twice (Estimate: $8,000-$10,000) which was prominently exhibited for a decade in the James Bond Room at Planet Hollywood London. 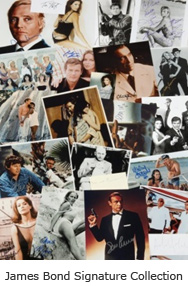 Other highlights of the James Bond 007 collection include the iconic black chair used by recurring super villain Dr. Blofeld in You Only Live Twice (Estimate: $1,500-$3,000) and Gucci luggage used by Roger Moore in the 1974 film The Man With the Golden Gun (Estimate: $4,000-$6,000). The high-tech gadgets, an important theme in the films, are also included. A mobile phone conceived as a remote control device that has a taser and fingerprint scanner from Tomorrow Never Dies (Estimate: $2,000-$4,000) and recurring character Moneypenny’s laptop from the same film (Estimate: $4,000-$6,000) are included in the highlights. 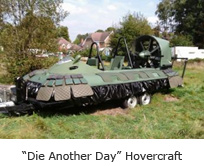 Scripts, concept drawings from the films, a James Bond autograph collection (Estimate: $4,000-$8,000) and posters are also included in the highly anticipated auction. The James Bond autograph collection includes signatures from Roger Moore, Timothy Dalton, Eva Greene and Daniel Craig. An original 30” x 40” Goldfinger poster from 1964 is one of many posters to be offered (Estimate: $3,000-$5,000).

Over 25 lots of James Bond memorabilia, some of which have been previously owned by renowned James Bond experts, span over four decades of James Bond history. Many of the lots are being offered to the public for the very first time.

About Julien's Auctions
With expertise specializing in entertainment and sports memorabilia, Julien’s Auctions, auction house to the stars, has quickly established itself as the premier auction house in high profile celebrity and entertainment auctions. Julien’s Auctions presents exciting, professionally managed and extremely successful auctions with full color high quality auction catalogs unlike any other auction company. Previous auctions include the collections of Cher, U2, Barbra Streisand, the estate of Marilyn Monroe and many more. Official website is www.juliensauctions.com.