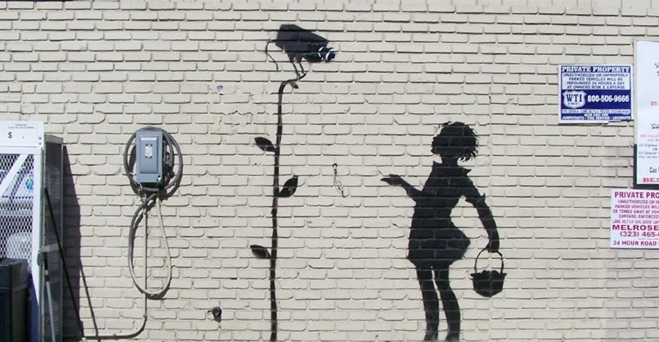 Beverly Hills, California – November 11, 2013 … Julien’s Auctions, the world’s premier entertainment and music memorabilia auction house, has announced the addition of several rare pieces of Banksy art to its Street Art Auction to take place on Thursday, December 5, 2013 at the Julien’s Auctions Beverly Hills gallery. The elusive British artist continues to remain remarkably anonymous while causing controversy or mayhem including in New York where recently vandals painted their own graffiti over several Banksy art murals around the city, causing a fury of disdain amongst Banksy fans. In addition to the rare sale of an original mural titled “Flower Girl,” which formerly occupied a Los Angeles gas station, Julien’s Auctions has announced the sale of four more Banksy originals. This rare opportunity to own one of Banksy’s early large-scale graffiti murals or works from New York will mark the first time a work of public street art by Banksy will be sold at auction in America. 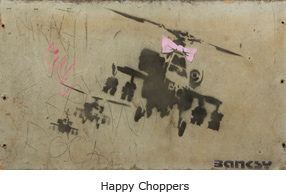 • “Happy Choppers” (2002), an aerosol stencil depicting a squadron of armed military helicopters with the lead “chopper” dressed in a pink bow. The piece is signed by Banksy using a multi-colored layered font. The street work was discovered in Central London at the Whitecross Street Market in 2002. It is a wonderful example of Banksy’s helicopter motif, an image which he has revisited many times and has since become part of his iconic repertoire. (Estimate: $150,000-$200,000.)

• A three-color stencil and freehand work, depicting a young girl joyfully embracing a television set, titled “TV Girl” (2003/04) is part of the collection being offered. On the screen of the television there appears an orange heart. 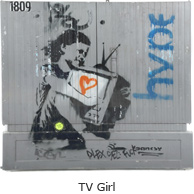 This piece was executed by Banksy during his German tour of 2003/2004 on the door panels of a "Draco" transformer box originally located on the corner of Gipsstrasse and Joachimstrasse in Berlin-Mitte. Signed by Banksy to lower right. The piece is accompanied with works by additional street artists including a sticker reading "Kunst für Alle" (Art for All), a stenciled tag reading "Hype," and an obscene remark directed specifically at Banksy. (Estimate: $80,000-$120,000.)

• A black aerosol stencil depicting a white-collared rat wearing a bowler hat and tie, parachuting with an umbrella, titled “Umbrella Rat” (2003/04), executed by Banksy during his German tour of 2003/2004 on a heavy steel door located below an S-Bahn railway arch in Berlin-Mitte. This piece is also accompanied with works by additional street artists, including two stencils and various tags. (Estimate: $40,000-$60,000.)

• “Black Bobby” (2003), a black aerosol stencil depicting a life-sized British policeman appearing to be of African descent writing out a ticket beneath remnants of paper flyers featuring Death with the caption “Wrong War,” created by Banksy in 2003 during the first-ever “Semi Permanent” exhibition in Sydney, Australia. “Black Bobby” was originally part of a large wall erected specifically for exhibition members to apply their art. (Estimate: $20,000-$30,000.)

• Also included in the sale are a pair stenciled wall panels created by Banksy for his 2006 "Barely Legal" exhibition in Los Angeles. These panels depict a stylized fleur-de-lis pattern stenciled in gold aerosol over a red acrylic background, imitating brocade wallpaper. These panels were part of the exhibition's central work, a large-scale installation known as "The Elephant in the Room" which featured a live elephant that had been camouflaged with paint to match the walls of a posh living room created by these panel. The work was said to represent the public's blind eye toward the mammoth crisis of world hunger. A portion of proceeds from this sale will go towards promoting clean drinking water in developing nations.

Banksy is one of the world’s most provocative artists. TIME Magazine selected the British graffiti master, painter and activist, as one of the world’s most influential people in 2010, among people such as Steve Jobs, Barack Obama, Lady Gaga and others. Although his art commands hundreds of thousands of dollars, his identity remains concealed. His world-famous street art can be found on facades from Great Britain to Israel’s West Bank to the streets of Los Angeles. The majority of works by this controversial artist reflect his criticism of the government, presenting strong themes concerning surveillance and the government’s role in modern society.

For “Flower Girl,” Banksy utilized black aerosol stenciling to reveal a young girl in silhouette with a basket of picked flowers, gazing up into a security camera which has blossomed from a tall plant. In his signature style, the camera is adorned with a long rattail, one of Banksy’s signature motifs. In “Flower Girl,” the artist poignantly juxtaposes the innocence of a young girl picking flowers with the curious and questioning gaze of someone not yet willing to back down.

Banksy’s upward trajectory can be traced from his early days when he was labeled an “outlaw” to his current status as a world renowned artist. He has presented his graffiti on gritty urban walls as well as on stretched canvas, produced works of conceptual sculpture, and been the subject of an Academy Award nominated film, “Exit Through The Gift Shop”.

“Flower Girl,” which transformed the 9x8 foot gas station wall into one of the artist’s signature murals, will make a special entrance to Julien’s Auctions as part of a special unveiling to take place prior to the auction.

Julien’s Auctions Street Art Auction will include 92 pieces of rare street art for collectors and art enthusiasts from around the globe. All of the art featured is rich in storytelling and uniqueness that combines a sense of controversy as well as an outstanding place in art history.  The auction also includes pieces by Mr. Brainwash, Shepard Fairey, Risk, MearOne, D*Face, Chaka, and more!

All of the property in the auction will be featured in a full color limited edition catalog available for purchase at www.juliensauctions.com and is rightfully a book of art in its own right. Julien’s Auctions Street Art auction will kick off a three–day event which also will include Icons & Idols: Rock n’ Roll.