Beverly Hills, California – May 7, 2013 — Julien’s Auctions, the world’s premier entertainment and sports memorabilia auction house, announces Sports Legends, an unprecedented collection of sports memorabilia to be offered over two-days at Julien’s Auctions gallery in Beverly Hills.  The two-day event will take place on Friday, May 31, 2013 and Saturday, June 1, 2013.

For the first time, Julien’s Auctions will present historic collections including iconic pieces from the Harlan Werner Muhammad Ali Collection, the Whalen “Whaley” Monica World Series and All-Star Game collection in its entirety, and the collection of NBA Legend Elgin Baylor. All of the collections feature game used and signed memorabilia as well as personal effects spanning over 50 years.

Harlan Werner had the great fortune to have worked for the Ali family as their agent for almost 20 years. Over that period, Werner amassed an expansive collection of memorabilia from the “Greatest of All Time,” Muhammad Ali. This will be the very first time the Werner collection will be offered at auction. 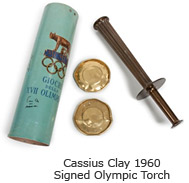 Werner traveled with Ali to numerous countries and various states throughout the U.S. Werner also estimated that he has spent close to 1,000 days with Ali during their time together. He helped raise funds to build the Muhammad Ali Center in Louisville, Kentucky, has donated items from his personal collection to the Ali Center, provided items from his collection that were used to create props for the film Ali starring Will Smith and has been covered in numerous news articles around the world and as a guest on 60 Minutes.

Highlights from Harlan Werner’s Muhammad Ali collection include one of Ali’s iconic boxing robes worn by Ali in November and December 1981 while preparing for the last fight of his career against Trevor Berbick, coined the “Drama in the Bahamas.” The robe is also signed by the boxing legend.

Ali was first known to the world when he won the gold medal in the Light Heavyweight division at the 1960 Olympics in Rome, Italy. Also offered is an original 1960 Olympic torch with original canister, signed by Ali “Cassius Clay” and, from the same Olympics, the bronze medal won by Italian Light Heavyweight boxer Giulio Saraudi. This is one of 4 medals awarded in Ali’s division at the 1960 Olympics and may represent the closest opportunity a collector may have to owning Ali’s medal itself.

Other highlights of the Werner collection include Muhammad Ali’s 1960 AAU National Amateur Boxing Championships “Most Outstanding Boxer” Award, a Muhammad Ali and Leroy Nieman signed and dedicated “Homage to Ali” serigraph, original hand-drawn artwork by Ali himself, autographed trunks, gloves and fight posters, and a remarkable array of individual photographs featuring Ali with numerous iconic sports legends of his time. These include Joe DiMaggio, Jack Nicklaus, Joe Montana, Magic Johnson, Joe Frazier and Mike Tyson. Each photograph is signed by Ali and the athlete featured. 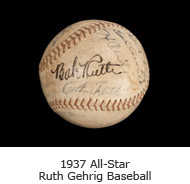 The Whalen “Whaley” Monica World Series and All-Star Game Collection is a testament to his devotion to the game of baseball. Monica started attending baseball’s World Series in 1926 and baseball’s All-Star game in 1937. He never missed a game for over 50 years with the exception of the two years he served in the U.S. Coast Guard (1944-1945). He amassed an incredible collection of baseball memorabilia which will be offered during the Sports Legends event. Beginning in 1948 Monica worked with production companies covering the World Series and All-Star Games. His work would eventually lead him to positions with “This Week in Baseball” and Major League Baseball Productions.

Highlights from the Monica collection include Brooks Robinson’s complete 1969 World Series Baltimore Orioles game worn uniform. Robinson gave the uniform to Monica after the Orioles lost to the New York Mets in the 1969 World Series. Other highlights include Sal Bando’s 1973 World Series Oakland A’s game worn jersey, Whitey Ford’s New York Yankees warm-up jacket, an array of hats worn in the World Series and All-Star Games by Reggie Jackson, Al Kaline, Richie Ashburn and Dave Winfield, signed game programs, and autographed baseballs which were used in batting and/or fielding practice and signed on-site at the games by the very players practicing on the field. 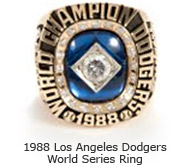 Boxing, Baseball, Soccer, Golf, Football, Racing and Cricket will all be part of the Sports Legends auction offerings. Basketball will take center court when the Collection of Elgin Baylor is also offered on Friday. The exclusive collection of the eleven-time NBA All-Star, Basketball Hall of Fame inductee and L.A. Lakers legend features memorabilia from every stage of his career. The legendary Baylor is one of the NBA’s 50 greatest players of all time and was also the 1958 #1 draft pick, 1959 NBA Rookie of the Year, 11-time NBA All-Star and 1977 NBA Hall of Fame Inductee. Baylor was the first player who took the game off the floor with powerful, high-flying acrobatic and ballet-like moves never before seen in the game. He set the stage for players like Dr. J and Michael Jordan. 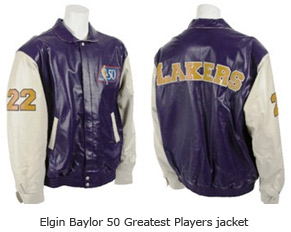 Baylor’s exclusive collection features a wide array of memorabilia from every stage of his career. From his beginnings at Spingarn High School in Washington D.C., through his 1977 NBA Hall of Fame induction, into his post-playing career as an NBA coach and being named 2006 NBA Executive of the Year, this is the first time property from Elgin Baylor’s personal collection has been offered for auction.

All of the property in the Elgin Baylor and Sports Legends auctions will be featured in full color limited edition catalogs available for purchase at www.juliensauctions.com.

THE COLLECTION OF ELGIN BAYLOR
AND SPORTS LEGENDS PRESS CALL