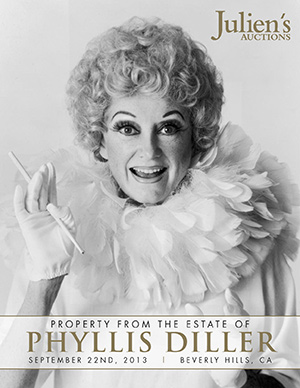 STAGE WORN COSTUMES, PROPS AND JEWELRY COMBINED WITH DILLER'S OWN COLLECTION OF FINE ANTIQUES TO BE OFFERED

Beverly Hills, California…August 21, 2013...Julien’s Auctions, the world’s premier celebrity and entertainment memorabilia auction house, announced the exclusive auction of property from the life and career of the first lady of stand-up comedy, Phyllis Diller on Sunday, September 22, 2013. The pop culture icon and comedian was known for decades for her self-deprecating humor. In the 1960s, her fame skyrocketed and she appeared on several of Bob Hope’s television specials, USO tours and three movies. Her signature blonde wig, long cigarette holder and loud cackling laugh has yet to be duplicated, giving her a place in comedic history as the very first female trailblazer of her time. 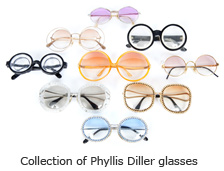 Her jokes and gags played off of a persona of dreadful cook and eccentric, disheveled housewife to “Fang,” her imaginary husband. In real life, Diller was very attractive and once was photographed for Playboy magazine, although the photos never went to print. The auction will include extraordinary costumes, wigs and jewelry from her professional stage and television appearances, together with outstanding antiques, artwork, and memorabilia from her longtime residence on South Rockingham Avenue in Los Angeles.

These highlights include a camel colored coat and dress ensemble that Phyllis Diller wore to the Bob Hope Airport dedication ceremony (estimate $1,000-2,000), a black chiffon dress ensemble worn by Phyllis Diller to the Bob Hope Memorial Tribute at the Academy of Television Arts and Sciences (estimate $600-800), a half-length portrait of Bob Hope from the eponymous “Bob Hope Salon” in Diller’s Brentwood estate and numerous photographs, documents, and mementos from their long friendship. It is a story of Hollywood’s golden era of comedy, representative of two of the most famous names to ever capture the hearts of audiences around the globe.

Other highlighted costumes and accessories from Diller’s stage performances and television work include: a velvet robe worn on The Love Boat (estimate $800-1,200); a performance worn pink sequined dress (estimate $800-1,200); and many of Diller’s Omar of Omaha dresses designed, in reality, by Gloria Johnson including the dress worn on The Sonny and Cher Comedy Hour ($600-800) during a discussion of marriage with Cher; along with Diller’s costume wigs, jewelry and footwear (various estimates). Personal clothing including designer dresses worn for events and award shows include Christian Dior ($600-800), Guy Laroche ($600-800), Versace ($600-800) and others. 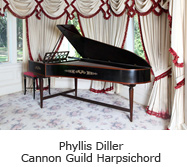 “I knew Phyllis very well and the memories of our time together are something I will always cherish. Her energy for life, humor and laughter are things that I miss very much but am so thankful to have been able to experience throughout our friendship,” said Martin Nolan, Executive Director of Julien’s Auctions. “Many people knew and loved Diller for her signature laughter and on-stage persona but she also had an extraordinary eye for beautiful antiques, collectibles and interesting treasures, all of which will be offered at this exciting auction.” 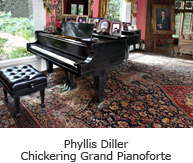 Additionally, this auction includes a number of pianos played by Diller, an accomplished concert pianist, and many selections of paintings and prints from her own secondary career as studio painter. Highlights include a black lacquer Chickering Grand Pianoforte, signed “Phyllis Diller” in silver marker pen (estimate $10,000-15,000), a custom made Cannon Guild Harpsichord (estimate $5,000-10,000), and an oil on canvas painting of a stage with curtains and a shining spotlight from the foyer of her house (estimate: $2,000-3,000). It was this painting which she had each houseguest pose in front of upon entry to her home. Awards, personal mementos, photographs, scripts, handwritten letters, personal clothing and other remarkable collectibles from Diller’s life and career are included in this auction. Her personal artwork which was very much a reflection of her soul and her bright, whimsical approach to life are included amongst the highlights.

Diller was born Phyllis Ada Driver in Lima, Ohio in 1917. She had six children with her first husband, Sherwood Diller, whom she married in 1939. She later married Warde Donovan in 1965, only a month after divorcing Diller. The second marriage lasted 10 years. Her very first stand-up comedy appearance was as a contestant on Groucho Marx’s show “You Bet Your Life” in 1957. She hosted her own variety show on NBC, had a run on Broadway and created several comedy albums. She officially retired from comedy in 2002 and focused on her creative passion, which was painting. It was Phyllis Diller who became one of the world’s most adored female comics whose accomplishments open doors for generations of women entertainers who followed. She died in August of 2012 at the age of 95.

All of the property in the auction will be featured in a full color limited edition catalog available for purchase at www.juliensauctions.com. The Property from the Estate of Phyllis Diller Auction will be held on Sunday, September 22, 2013 following a two-day auction featuring the Property from the Estate of Bob & Dolores Hope, her great friends, which will be held at Julien’s Auctions Beverly Hills on September 20 and 21, 2013.