FINE ANTIQUES, RARE MEMORABILIA, EXTRAORDINARY ART AND PERSONAL EFFECTS FROM THE ESTATE OF BOB AND DOLORES HOPE TO BE OFFERED BY JULIEN'S AUCTIONS 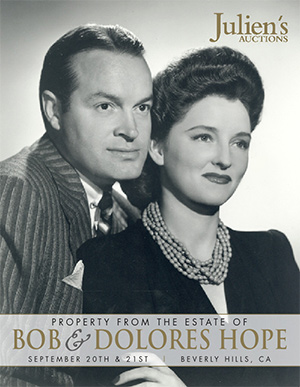 Bob Hope was one of the world’s most prolific entertainers with a career that spanned more than 60 years and included vaudeville, radio, film and television. Often referred to as “Mr. Entertainer,” Hope was a comedian, actor, singer, dancer and author. He was also a golfer to be reckoned with, helping to establish the pro-Am tournament as way to raise funds for charity. His commitment to the men and women who served their country was legendary. His USO (United Service Organizations) shows around the world between 1942 and 1988 later earned him a Congressional declaration designating him an honorary veteran of the United States Armed Forces, an honor he said was the greatest one of his life.

Over his career Hope appeared in over 70 films and shorts including a series of "Road" movies co-starring Bing Crosby and Dorothy Lamour. He hosted the Academy Awards a record fourteen times, appeared in numerous stage productions and hosted a long running television special. He was the author of fourteen books and participated in the sports of golf and boxing. He also owned a small stake in his hometown baseball team, the Cleveland Indians.

Dolores Reade married Bob Hope in 1934 after meeting him at the Vogue Club in Manhattan where she was singing. As Bob used to say, “it was love at first song.” They would spend 69 years together during which time they raised four children. She dedicated her life to supporting Bob, her family and various charitable causes. She began helping her husband on his tours entertaining the U.S. troops overseas in the 1940s, which she continued for over fifty years. At age 83 she recorded her first compact disc, “Dolores Hope: Now and Then” which she followed with three additional albums and also recorded a Christmas CD with Bob entitled “Hopes for the Holidays.” She was 102 when she died in 2011. 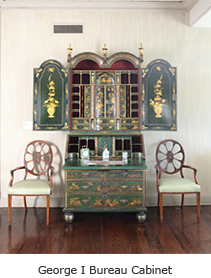 The Collection of Bob and Dolores Hope includes an impressive assortment of antiques, career memorabilia and personal property from their residence in Toluca Lake and their landmark Palm Springs home which was designed by renowned architect John Lautner. The intrigue of both homes lies with the long list of celebrity entertainers and friends, dignitaries and world leaders who would often visit the Hopes. With a career that spanned the 20th century, the collection covers an impressive history of Bob Hope’s personal and professional achievements and some of Hollywood’s most memorable and cherished moments. 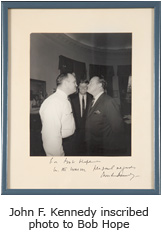 "There has never been anyone who has entertained more people in more places than the legendary Bob Hope,” said Martin Nolan, Executive Director of Julien’s Auctions. “This collection represents over 60 years of Hope’s illustrious career. It takes us back to his vaudevillian days and all the way through his time on the golf course. I can picture him now standing on stage with that iconic grin telling one of his famous jokes or stepping out with some of the world’s most famous celebrities. There will never be anyone else like him and we are thrilled to be able to offer such an exclusive collection of true Hollywood history.”

Some of the very sought after Bob Hope memorabilia in the auction include signed Presidential books and photographs, award plaques, trophies, figurines and novelty items from political luminaries and celebrities. Also included are mementos from the Hopes’ charitable causes, military and veterans honorary awards, along with exotic international decorative items acquired from his legendary USO tours. 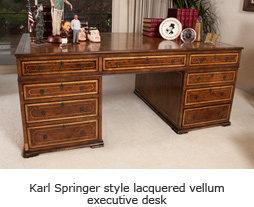 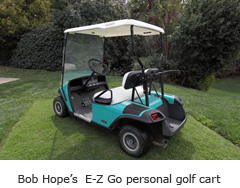 Collectors will also get excited with the multiple McGuire bamboo furniture suites in the Gothic and Clover styles (estimates ranging from $400-$1,800) to be offered as well as Hope’s Karl Springer style lacquered vellum executive desk (Estimate: $3,000-$4,000), two pair of Karl Springer acrylic table lamps (Estimated each at $2,000-$3,000), and three lots of Walter Lamb designed Brown Jordan patio furniture (Estimated each at $2,000-$4,000). There are also numerous fine art paintings from a number of 20th century artists, including pieces from Marion Pike and Jetta Stoltz.

Bob Hope’s career was legendary. He remains Hollywood royalty. No other entertainer of his time has left such a mark on show business.  He was an entertainer for everyone and often could be found hanging with Hollywood elite or entertaining troops in far-away places. His jokes are timeless, his appearances always a ratings hit and his golf game one to admire.

All of the property in the auction will be featured in a full color limited edition catalog available for purchase at www.juliensauctions.com.