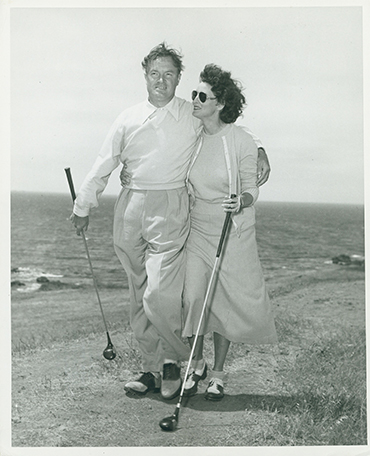 Beverly Hills, California…August 19, 2013….In 1933, Bob Hope walked into The Vogue Club in New York City and a young beauty by the name of Dolores Reade was on stage, singing.  “It was love at first song,” he said. Soon after, they had their first date and discovered a mutual passion that helped clinch the deal … Golf. In a lovely restaurant with a pristine white table cloth as their drawing board, they scribbled drawings and diagrams of holes they had played and where their shots landed.  Little did they know that that evening would be the beginning of almost seventy years together and that golf would be a source of endless conversations, instructions, despair and laughter. Later in life, Bob and Dolores Hope attributed their mutual love of the game as one of the ingredients of contributing to the success of their marriage.

Hope never left home without his clubs. From the deserts of Iraq to the jungles of Vietnam to the steel decks of ocean going battleships, he stood on stages, club in hand, and brought laughter and a touch of home to American troops abroad.

He played golf whenever and wherever he could, even driving balls off the USS Iowa toward cheering sailors aboard a nearby ship. On the home front, the Hopes built their Toluca Lake estate virtually next door to Lakeside Country Club where they became lifetime members.

But it was the siren call of golf in Palm Springs that led to the most important professional and philanthropic collaboration of their marriage: the symbiotic relationship between the Bob Hope Desert Classic and the establishment of the Eisenhower Medical Center. In 1965, Hope became the “driving” force behind the Desert Classic and Dolores Hope became the primary mover and shaker behind the founding of the Eisenhower Medical Center, named after their good friend, Dwight D. Eisenhower. As ground was being broken for the Center, the Classic was quickly becoming one of the most successful pro-am tournaments in the country. Over the next 47 years, the Classic raised millions and millions of dollars for the Eisenhower Medical Center as well as many other desert charities. Dolores Hope was EMC President for seven straight years, then chairperson and for the rest of her life remained involved in key leadership capacities and dedicated to its cause. She once said, “I played a lot of golf before I became involved with the Center. Yes, my game has suffered but my life has been greatly enriched.”

Gerald Ford, 38th President of the United States, said, “Bob Hope has contributed immeasurably to the good things golf can provide.” Ford and Hope were very close friends and shared a passion for the game. However, Ford was infamous for beaning folks in the galleries and this, of course, made him one of Hope’s most favorite subjects. “There are over 50 golf courses in Palm Springs and Jerry never knows which one he’s playing until after he tees off”, Hope once joked to great laughs. But he was friends with many presidents and played golf with several of them regularly. President Richard Nixon once famously landed in the presidential helicopter on the grounds of the Hope estate and whisked him off to play a round with Jimmy Stewart and Fred McMurray at nearby Lakeside. At the White House, Hope once demonstrated his putting acumen by knocking the ball into an ashtray held by Nixon.

George H. Bush joined Hope for one of the Desert Classics, as did Bill Clinton. Clinton and Hope enjoyed many laughs together, and Bob loved his spirit and wonderful sense of humor. After Hope’s death, President Clinton took on the hosting duties at the newly named Humana Challenge, formerly the Bob Hope Desert Classic.

Golf was at the center of Bob and Dolores Hope’s long lives. It gave them great joy, great friends and the opportunity to do very, very good work.

For information on bidding, complete list of auction items or for hi-res images go to www.juliensauctions.com.