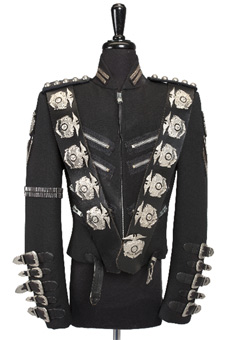 Beverly Hills, California – May 14, 2012 … Julien’s Auctions, the premier celebrity and entertainment memorabilia auction house and the Museo de la Moda located in Santiago, Chile will exhibit some of the world’s most iconic costumes designed by Dennis Tompkins and Michael Bush. The exhibit opens May 18, 2012. These never-before-seen items since they were used by Michael Jackson will tour multiple continents including South America, Europe and Asia before being sold by Julien’s Auctions on December 2nd in their Beverly Hills, California gallery.

The exhibit includes the designs created by Michael Jackson’s long time costume designers Dennis Tompkins and Michael Bush. The exhibit includes items which are also featured in the highly anticipated illustrated book by Michael Bush, “THE KING OF STYLE: Dressing Michael Jackson,” which will be published by Insight Editions and available October 30, 2012. Guests at the exhibition will have the opportunity to pre-order the limited edition fashion design book prior to its initial printing. The book is the first art-driven book about the costumes, apparel, shoes and accessories worn by Michael Jackson including hundreds of lavish photographs and a behind-the-scenes look into the collaboration between him and the long-time designers. The book highlights Michael Jackson’s love of fashion and huge impact on popular culture. 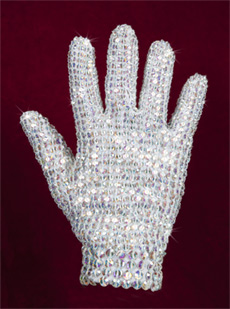 Highlights will include a 30th Anniversary of Madison Square Gardens show signed prototype helmet which was wired to illuminate a row of battery powered lights below the visor. The helmet is signed in black marker to designer Michael Bush and states “To Bush Love Michael Jackson,” and Jackson’s “Scream” video costume which includes a pair of black spandex pants with matching long sleeve shirt and mesh tuck strap. Each costume piece is marked on the interior in gold marker “2/2” or “2/2 M.J.J,” indicating that two costumes were created for Jackson’s famous video shoot. Michael Jackson’s Captain EO white spandex shirt featuring ribbed neck, zip closure and a rainbow motif is also included as well as the King of Pop’s Awards Ceremony jacket which is a black wool jacket embellished with red armband, gold tone metal floral buttons, metallic embroidered crown patch at chest and buckled leather straps at right shoulder. Jackson wore this jacket when he attended the 3rd annual Soul Train Awards in 1989 where he was honored with the Sammy Davis, Jr. Heritage Award, the Heritage Award for Career Achievement and awards for his single and video for “Man in the Mirror.”

The exhibit will feature dozens of costumes and personal fashion effects designed by Tompkins and Bush. Other highlights include his right-handed crystal covered glove created by the designers, along with a jacket from his personal wardrobe that he wore on several outings with Lisa Marie Presley. Also a breakaway suit from his BAD Tour (Australian leg) along with a Tompkins and Bush designed jacket signed by Michael Jackson which the musician was seen wearing at an event and a Naval officer’s hat by Bancroft Military Caps, signed in silver marker “Love Michael Jackson” on the top of the hat and worn by Jackson during his 1987-1989 BAD tour.

Other treasures to be displayed include a white cotton, button front, long sleeve custom shirt with red silk armband, epaulets and collar embellishments, Epaulets are embroidered “CTE,” a Michael Jackson worn leather lined, gold lame belt covered in silver bugle beads with square iridescent Swarovski square crystal buckle, a Michael Jackson “Bad” tour leotard featuring silver spandex with three silver buttons at the chest, buckled black leather straps at both arms and silver tone metal “Special Officer” badges at each shoulder. Others include a Michael Jackson shirt made by Tompkins and Bush for his own personal use, a gold and silver jump suit and gloves worn by Jackson on the HIStory tour, the Michael Jackson “Smile” costume as seen on the cover of his single for the song. The single was recorded for the 1995 double album HIStory: Past, Present, Future Book I. It was to be the 8th single released from the album but the single, bearing the image of Jackson as Charlie Chaplin was cancelled days before its release and copies destroyed. “Smile” was said to be Jackson’s favorite song. Also included is a leather jacket designed by Tompkins and Bush for Michael Jackson and seen on the back cover of the Dangerous World Tour program, a red silk sash embellished with ribbons, star studs and military metallic coil signed by Jackson, a stage black jacket worn for the DangerousTour and also worn for Michael Jackson’s 1993 Super Bowl performance amongst many others.

A portion of the proceeds of the auction will benefit two charities, Guide Dogs of America (GuideDogsofAmerica.org) and Nathan Adelson Hospice in Las Vegas (www.nah.org).

Guide Dogs of America is dedicated to its mission to provide guide dogs and instruction in their use, free of charge, to blind and visually impaired men and women from the United States and Canada so that they may continue to pursue their goals with increased mobility and independence. Nathan Adelson Hospice was founded over 30 years ago and became Southern Nevada’s first home care hospice with a mission to provide patients and their loved ones with comprehensive end-of-life care and influence better care for all in their community.

There is no doubt that Michael Jackson was a global fashion icon as well as award winning and beloved musician. His wardrobe dictated many of the styles throughout the last few decades. Jackson played a very intimate role in the designs and completion of every costume and piece of clothing he wore both on stage and in his personal life. Dennis Tompkins and Michael Bush shared a very personal and close 25 year relationship with the artist which is rich in story-telling that runs throughout the exhibit and tour as well as detailed in the upcoming book.

The Museo de la Moda is a celebration of the passion for fashion by its founder Jorge Yarur and opened in May, 2007. Not unlike Dior, Jorge’s mother was his inspiration for his love of fashion and considered the museum’s muse. Her image was often compared to remarkable physical similarities to screen goddess Rita Hayworth and is shown at the museum in galleries and videos. As a private investor, Yarur has had a huge effect on the valuation of fashion memorabilia and opened the museum to serve as a historic narrative of fashion and proof that museums can draw great crowds. The fashion exhibit will continue touring throughout the remaining part of the year and end with an exclusive auction of the costumes and wardrobe at Julien’s Auctions, December 2, 2012.  Information on the preview and auction highlights will be released in the next few months along with more details on the highly anticipated new book, “THE KING OF STYLE: Dressing Michael Jackson,” by designer Michael Bush. The author will also be making an appearance at the opening of the exhibition in Santiago, Chile and will share some of his own personal stories from his 25 years of designing for the King of Pop.

About Museo de la Moda
The Museo de la Moda is the world’s most fascinating Museum of Fashion and is located in Santiago, Chile. It is the result of one man’s passion for fashion and his mother’s early influence and memory. Founded by Jorge Yarur Bascunan in May of 2007, the museum opened to serve as a historic narrative of fashion and proof that such a museum can draw great crowds. The museum’s approximately 10,000 garments include a Jean Paul Gaultier conical bra designed for Madonna, a tutu worn by Margot Fonteyn, and pieces from an ‘80s exhibition including early collections from Vivienne Westwood and Thiery Mugler The museum has a café, El Garage, with floor-to-ceiling glass walls and colorful staging for its exhibits. For hours of operation and more information go to www.museodelamoda.com.

About Author and Designer Michael Bush
For 25 years, Los Angeles based costume designer Michael Bush, together with his partner Dennis Tompkins, who passed away in December 2011, created most of Michael Jackson’s personal and concert tour wardrobes – tens of thousands of original pieces. Their unconventional career provided them with the unique opportunity to work creatively with one of the world’s greatest entertainers, and through the medium of clothing help him express the artistic style that made him a cultural icon. In addition to their work for Jackson, Tompkins and Bush designed costumes for Britney Spears, including the red jumpsuit that she donned in the classic “Oops I Did It Again” video, as well as pieces for Elizabeth Taylor and Denzel Washington’s wife Pauletta. More information about Michael Bush and his book “THE KING OF STYLE: Dressing Michael Jackson” is available at dressingmichaeljackson.com.