Beverly Hills, California – December 2, 2012 … In a day full of as much anticipation as any Michael Jackson concert, Julien’s Auctions, the premier celebrity and entertainment memorabilia auction house, created a day full of special moments, worldwide bidding and the opportunity for museums, collectors and fans from around the world to bid on costumes and other items from the Collection of Tompkins & Bush, longtime fashion designers and friends of Michael Jackson. Darren Julien, founder and CEO of Julien’s Auctions, and Martin Nolan, Executive Director, led their entire team in a fitting tribute to the King of Pop by wearing sequined gloves specially made for the auction event. The one-year anniversary of the passing of Dennis Tompkins was also observed with a moment of silence at the beginning of the collection offering. 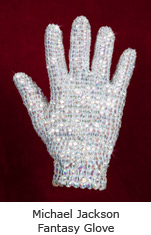 A portion of the proceeds of the auction benefits two charities, Guide Dogs of America (GuideDogsofAmerica.org) and Nathan Adelson Hospice in Las Vegas (www.nah.org). Both have special meaning to Michael Bush.

"We are so very grateful for everything Julien's Auctions and Michael Bush have done for us," said Lorrie Benson, Media and Community Liaison, Guide Dogs of America. "So many people who come to Guide Dogs of America for help will now gain their independence from their sincere generosity. We feel honored to have been a part of such a wonderful program."

"It has been so incredible to be involved with this auction and the support we have received from Michael Bush and Darren Julien, as well as the late Dennis Tompkins," said Carole Fisher, CEO of Nathan Adelson Hospice of Las Vegas. "Every day we deal with the reminder that life is precious and to know generosity still exists like this is remarkable. We shall surely help many people with their generous donation."

Other highlights were not limited to record prices but also for unprecedented memories. Debbie Jackson, a lifetime fan of Michael Jackson who has dedicated her life to preserving his memory, flew thousands of miles from New Zealand to attend the special event. Serious collectors, museum curators and fans from as far away as Japan, France and other countries attended the all day event, bid by phone or online. It was a spectacular day made for music history.

There is no doubt that Michael Jackson was a global fashion icon as well as an award winning and beloved musician. His wardrobe dictated many of the styles throughout the last few decades. Jackson played a very intimate role in the designs and completion of every costume and piece of clothing he wore both on stage and in his personal life. Dennis Tompkins and Michael Bush shared a very personal and close 25 year relationship with the artist.

“You know Dennis picked the date of this auction when we first began this process and ironically it was the exact date in which he passed two years ago. It’s as if Michael is still working his magic from up above,” said Michael Bush, fashion designer and author of King of Style: Dressing Michael Jackson. “I am so honored to know that museums, respected collectors and the fans were able to obtain a special piece of Michael Jackson today at Julien’s Auctions as I know they will be cherished for many years to come.”