PROPERTY FROM THE ESTATE OF GRETA GARBO 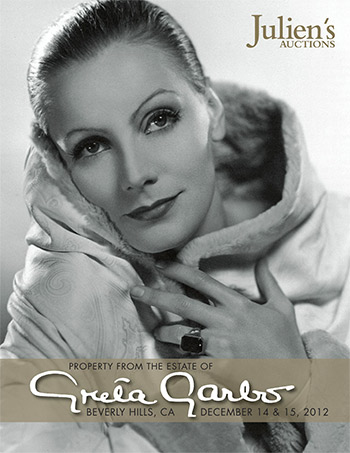 Beverly Hills, California – Wednesday, August 22nd, 2012 — Greta Garbo, the legendary Hollywood actress widely acknowledged as the most beautiful woman of the 20th Century, established an artistic legacy through her captivating screen performances. She also made an indelible impression as an icon of style and elegance that resonates to this day. No other Hollywood star of the studio era had a greater impact on her craft or on fashion and style. A luminous beauty and a powerful force within the Hollywood industry, Garbo was both brilliantly innovative and passionately enchanting on screen. 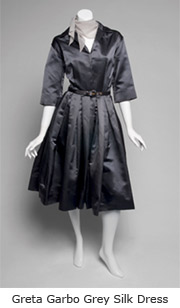 For the first time ever, Julien’s Auctions and the Estate of Greta Garbo will offer an opportunity to experience the personal collection of film star Greta Garbo. The collection, featuring Garbo’s personal clothing, accessories, furnishings and private possessions, has never been previously available and rarely seen by others. The public’s fascination with Garbo, who died in 1990, remains undiminished. Her screen performances continue to play to sold out audiences at international film festivals and she has been the subject of numerous museum exhibitions throughout the world. Garbo’s fans and admirers span the globe and straddle generations. To them Garbo remains the hallmark of true beauty, style, artistry and modernity. Contemporary audiences recognize in Garbo the roots of modern and hip style and behavior. Garbo has been called “The First Modern Woman”.

Greta Garbo was born in Stockholm, Sweden in 1905. As a teenager she worked at Stockholm’s leading department store and quickly became noted for her beauty and elegant charm. She was soon asked to appear in advertising films. These experiences solidified her interest in acting and she applied to the prestigious Royal Dramatic Theatre Academy. Garbo not only secured a place in the class but also received a scholarship. Her unprecedented and highly successful career as a movie star was launched at age 17 when she was cast directly from the theatre classroom to star in an epic silent screen drama. Garbo went on to star in another European film, Joseph Pabst’s The Joyless Street which further solidified her position as a premier European actress. Within months the MGM studio boss, Louis B. Mayer, beckoned her to Hollywood with a lucrative contract. Garbo would go on to star in 26 MGM films including classics like Camille, Anna Karenina, Grand Hotel and Ninotchka. She was also one of the few European stars to successfully navigate the transition from silent films to talkies with her career intact. Though she would continue to receive offers from film producers, Garbo made her last film in 1941.

Garbo’s first American film, The Torrent, opened in 1926 and her entrancing performance made Garbo an international sensation. Here was a woman unlike any other previously seen on a film screen. Audiences became obsessed with Garbo’s portrayals of utterly beautiful screen heroines who epitomized the emergence of the modern woman. Many of her films were considered controversial and sexually risqué. Garbo’s unabashed sensual qualities and her romantic self-assuredness proved a box office bonanza. As well, Garbo established herself as astute business woman. As a young woman living alone in a foreign land, she battled and even went on strike against her powerful studio bosses. She sought to receive additional artistic control over her film projects as well as compensation commensurate with her rising power at the box office. 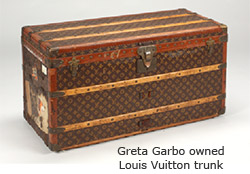 Women around the world recognized in Garbo a role model for equal pay for equal work and women’s rights issues. In 1956 Garbo was named “the most beautiful woman that ever lived”. She received four Academy Award nominations for Best Actress and in 1954 received her Academy Award for her “Unforgettable Performances.”

The very personal collection offered at this exclusive auction and exhibition, which includes an extensive assortment of clothing items designed by bespoke designer Valentina Schlee. Known as Valentina, the designer and Garbo had a complicated relationship. Not only were the two women collaborators on the design of the clothing created especially for Garbo, they were also neighbors and Valentina’s husband, George Schlee had an affair with Garbo. Garbo was also one of the very first women to appear in clothing and accessories from Emilio Pucci, Louis Vuitton, Gucci, Salvatore Ferragamo, Lilly Dache, Hubert Givenchy, and Mr. John, and many pieces from these designers will be part of the extensive wardrobe offering. During her international shopping expeditions Garbo procured or commissioned specialty clothing, luggage and accessories which are included in the sale and tour. Garbo became known as a stylish and highly imitated trendsetter appearing in the most fashionable places in New York, Paris, London and Florence wearing her trademark clothing ensembles consisting of sumptuous cashmere turtlenecks, tailored trousers, elegant walking shoes, broad-shouldered trench coats and mysterious sunglasses. 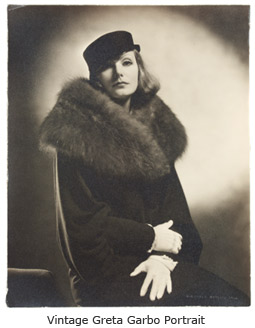 Select photographs from Garbo’s personal collection of Hollywood studio portraits (often referred to as Garbo’s Garbos) by photographers George Hurrell, Clarence Sinclair Bull, and Ruth Harriet Louise are also part of the exhibit and sale. Furniture, art and décor from Garbo’s New York apartment and Garbo’s Swedish manor house are also among the highlights. Garbo’s artistic talent for design can be seen in many of the sale’s offerings. Garbo’s colorful rugs featuring modern, abstract motifs were designed by the actress and handmade in the exclusive V’soske workroom. Garbo’s bed, which she designed using antique Swedish carvings reflects both her creativity and her affection for her Scandinavian heritage. Also included are very interesting personal books, albums, documents and signed and inscribed items.

In partnership with Julien’s Auctions, Derek Reisfield, Greta Garbo’s great nephew and producer of an award-winning documentary on Garbo, will sail on the November 20 Transatlantic Crossing of Cunard’s flagship Queen Mary 2.

Reisfield will be a featured speaker in the ship’s Insights Programme, providing a look into Garbo’s life, her film career and her position as a cultural icon. In addition, select items of Property from the Estate will be exclusively available for auction to guests sailing on this Southampton to New York voyage. Several Garbo travel-themed affects, which will be included in the general auction following the voyage, will be on prominent display for guests to view throughout the Crossing.

The Property from the Estate of Greta Garbo
Worldwide Exhibitions Schedule

About Greta Garbo (1905-1990).
Greta Lovisa Gustafsson was a Swedish film actress. Garbo was an international star and icon during Hollywood's silent and classic periods. Many of her films were sensational hits. Garbo was nominated four times for an Academy Award and received an honorary one in 1954 for her "luminous and unforgettable screen performances". She also won the New York Film Critics Circle Award for Best Actress in both Anna Karenina (1935) and Camille (1936). In 1999, the American Film Institute ranked Garbo on their list as one of the greatest female stars of all time.

About Cunard
Cunard Line, operator of the luxury ocean liners Queen Mary 2, Queen Victoria and Queen Elizabeth, has long been synonymous with the quest for new discoveries and the epitome of British refinement since the company's first paddle-wheeled steamer, Britannia, crossed the Atlantic in 1840. Cunard voyages bring together like-minded travellers who seek a civilised adventure and relish the Cunard hallmarks of impeccable White Star Service, gourmet dining and world-class entertainment. Today, Cunard offers the only regularly scheduled trans-Atlantic liner service and continues the legacy of world cruising which it began in 1922.

About Newbridge Silverware
For 80 years, Newbridge Silverware has been designing and producing quality giftware and tableware. The evolution of the Newbridge Silverware brand from that which was associated with cutlery to a premier name in quality jewelry and lifestyle products is indeed remarkable and today the brand is widely regarded as Ireland’s premier giftware brand. Over time the brand has been associated with many high profile names such as supermodel and author Sophie Dahl, style icon Yasmin Le Bon, top international Rugby legend Ronan O’Gara, Hollywood actress Linda Gray, and legendary style icons Audrey Hepburn, Grace Kelly and Maureen O’Hara.