Beverly Hills, California….August 9, 2011…. Julien’s Auctions, the world’s premier entertainment and celebrity auction house will offer a rare glimpse into the life of one of Hollywood’s most colorful stars, Tony Curtis. The rare Hollywood star whose off-screen character was often more sensational than his on-screen one, lived a life that could be its own movie or television series. Curtis’ career spanned six decades with popularity during the 1950s and 1960s enabling him to transpose his good looks into super movie stardom. He acted in over 100 films ranging from light comedy to serious drama and he also made numerous television appearances.

Among Curtis’ most memorable films were 1959’s “Some Like It Hot,” 1960’s “Spartacus,” 1953’s “Houdini,” 1952’s  “Son of Ali Baba”, 1957’s “Sweet Smell of Success,” 1965’s The Great Race and of course 1968’s “The Boston Strangler,” often noted as his most serious part. He earned an Oscar nomination for the 1958 crime drama “The Defiant Ones.” The film “Some Like It Hot” in which he acted with icon Marilyn Monroe and Jack Lemmon has been called the funniest film in history by the American Film Institute. 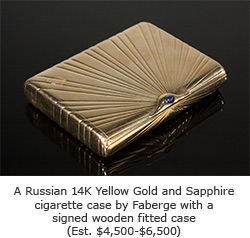 He also acted with such greats as Burt Lancaster in “Sweet Smell of Success” and Cary Grant in “Operation Petticoat.”  Curtis was often noted for his impeccable comedic timing.  Off screen Curtis earned even more attention for his personal life which was filled with great turmoil and change. He married five times, his first and most famous to actress Janet Leigh.

In addition to being a popular actor, Curtis was a fine art connossiuer. Collectors will have the opportunity to purchase some of his impressive art collection along with items from his illustrious career at Julien's Auctions Gallery in Beverly Hills on September 17th, 2011. A portion of the proceeds from the auction will benefit Shiloh Horse Rescue, a charitable organization founded by Jill and Tony Curtis that rescues and rehabilitates abused, neglected and slaughter-bound horses of all types (www.shilohhorserescue.com). 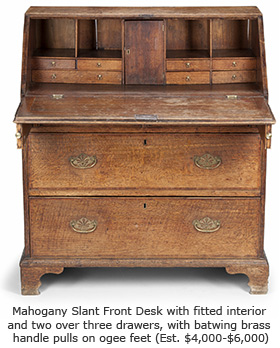 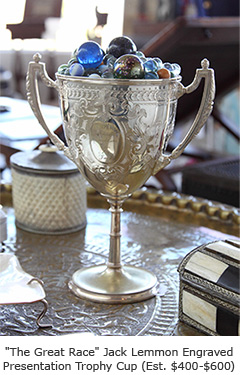 The Curtis Estate auction features property spanning from his World War II Naval stint through the first decade of the 21st century. Fine art highlights coming to the block include the Andy Warhol Some Like it Hot Shoe, given to Curtis as a gift by the artist, (est $20,000/30,000), three drawings by Balthus (two est $25,000/35,000 and one est $30,000/40,000), a Maurice Denis oil on canvas study for the Baptism of Christ Mosaic at the Church of Saint Paul in Geneva, Les Ondes, (est $20,000/30,000), ceramics and prints by Picasso, Braque, and Chagall, a fine collection of 20th century American, British, and European paintings, and many selections from Tony Curtis's own secondary career as an artist, including paintings, drawings, prints, ceramic vases, and a tapestry. Also available for the first time are a selection of assemblage shadowboxes, a type of artwork very personal to Curtis and never before exhibited or sold to the public, although these items were occasionally bestowed as gifts upon friends and family.

Tony Curtis was an inveterate collector with a discerning eye. His treasures, collected from his travels all over the world, range from Faberge objets de vertu ( a 14k gold cigarette case, est $4,500/$6,500; and a trefoil dish inset with Russian coin, est $3,000/5,000), to fine watches (including an 18k gold Audemars Piguet Chronograoh wristwatch, est $6,000/8,000), to fine furniture (a Chinese Chippendale expanding writing desk, est $4,000/6,000), to boxes that he personalized with found objects, trinkets and mementos, preserved as he left them (numerous lots with estimates between $200 and $1,000).

Choice memorabilia items from Curtis’ acting career include a yachtsman’s jacket from the famous shipboard kissing scene with Marilyn Monroe in Some Like it Hot (est $10,000/15,000), a beautiful rosewood Rudall and Carte flute given to Curtis by Frank Sinatra (est $3,000/4,000), his Photoplay 14k gold medal award for Most Popular Male Star won in 1958 (est $3,500/4,500), and Hanna/Barbera’s own depiction of Stoney Curtis in an animated cel from an appearance on the Flintstones (est $1,200/1,800).

This auction also proudly showcases awards, mementos, photographs, letters, clothing, and personal effects from all phases of Curtis’ life and career and reflecting his many interests and talents. A full list of items for auction can be viewed at www.juliensauctions.com.  This is indeed a unique opportunity to see the lifestyle of one of the world’s most talked about actors whose iconic twists beyond his roles still talked about in many circles. 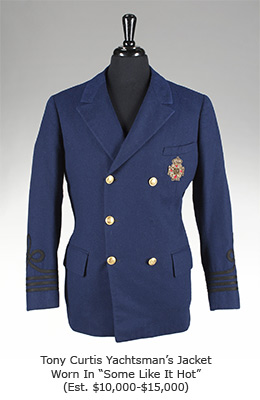 Registering to Bid
Registration is required to bid in this live auction and can be done either in person at the exhibitions and auction or by visiting our Registration page at www.juliensauctions.com before the sale or by calling (310) 836-1818.

About Julien's Auctions
With expertise specializing in entertainment memorabilia, Julien’s Auctions has quickly established themselves as the premier auction house in high profile celebrity and entertainment auctions. Julien’s Auctions presents exciting, professionally managed and extremely successful auctions with full color high quality auction catalogs unlike any other auction company.  Previous auctions include the collections of Cher, U2, Barbra Streisand, the estate of Marilyn Monroe and many more. Official website is www.juliensauctions.com.