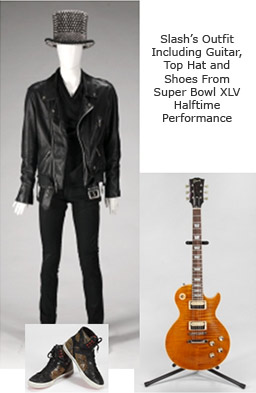 Julien’s Auctions, the world’s premiere entertainment memorabilia auction house located in Beverly Hills, proudly announces the sale of exclusive property from legendary guitarist and musician Slash. Included in the auction sale are some of the iconic, Grammy-winning, rock guitarist and songwriter’s famous guitars, memorabilia, vehicles and personal furniture and décor from his Hollywood Hills residence. This is the first time such items from Slash’s personal collection have been offered globally for auction.

Highlights from the sale include guitars from Slash's fabled personal collection, including a one of a kind custom Stravinski Fender Stratocaster (Est: $3,000-5,000), a B.C. Rich Red Mockingbird guitar (Est: $2,000-4,000), and two versions of Slash's very own Gibson and Epiphone Slash Les Paul signature model guitars in Tobacco Sunburst (Est: $4,000-6,000). 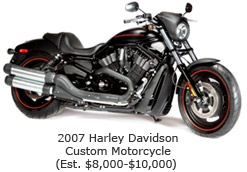 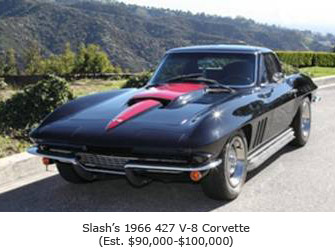 The auction will also feature the eclectic residential décor including a number of exotic Southeast Asian furniture items, such as the carved polychrome painted and gilded armoire (est. $400-600), as well as contemporary pieces including a pair of monumental red suede conversation sofas (Est: $3,000-4,000), accented by lots that also include a pair of silver and black beaded skull pillows (Est: $200-300). Other distinctive items offered in the sale include a Velvet Revolver Nolde Pottery Skull (Est: $400-600), an Asian-carved wooden cobra statue (Est: $400-600), and a large collection of model dinosaurs, some crafted by noted Paleo-sculptors Bob Morales and Michael Trcic, and a group featuring Pterodactyls (Est: $1000-2000). 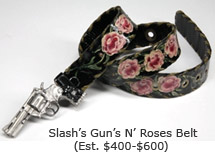 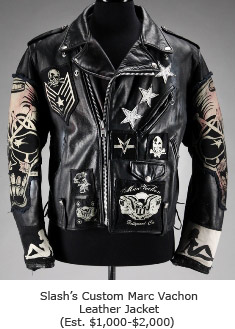 Ever the archetypal rock star and ranked as one of the world’s best guitar players of all time, Slash has spent years traveling the world and collecting various items which will now come to the auction block for the very first time. Some of his eclectic collection tells the story of Slash’s love of film, television and fast cars. Offered are items which include the bench from the “One Flew over the Cuckoo’s Nest” movie set (Est: $6,000-8,000), a South Park Pinball Machine (Est: $2,500-3,500), a 2007 Harley Davidson V-Rod VRSCAW Twin Racing Street Custom Cruiser (Est: $8,000-10,000), and the star of the show is his 1966 Corvette equipped with a big block 427 cubic inch V-8 engine with 435 horsepower, 4-speed manual transmission (Est: $90,000-$100,000).

From his days in Guns N’ Roses and Velvet Revolver and his most recent critically acclaimed solo album project Slash, the top-selling musician has left his mark on rock-n-roll. He’s appeared on numerous television programs, continues to tour, is a playable character in the blockbuster “Guitar Hero” video game and has won accolades as the world’s best guitarist repeatedly over the years. His collection, being offered in this exclusive auction, will give the world a once-in-a-lifetime glimpse into the often secret world of a rock star’s life and travels and a portion of the proceeds benefits Los Angeles Youth Network in which Slash is very active. 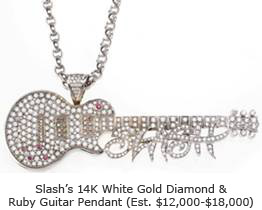 Fans who attend the auction
dressed as Slash will receive a free catalog.

About Julien's Auctions
With expertise specializing in entertainment memorabilia, Julien’s Auctions has quickly established themselves as the premier auction house in high profile celebrity and entertainment auctions. Julien’s Auctions presents exciting, professionally managed and extremely successful auctions with full color high quality auction catalogs unlike any other auction company. Previous auctions include the collections of Cher, U2, Barbra Streisand, Debbie Reynolds, the estate of Marilyn Monroe and many more.

About Slash
SLASH is widely considered one of the greatest rock guitar players of all time. He has received countless accolades and awards including a 2007 induction into Hollywood’s RockWalk (located in front of Guitar Center in Hollywood) alongside his idols Jimmy Page and Jimi Hendrix. An original member of iconic rock band Guns N’ Roses, the Grammy-winning SLASH helped the band create signature sounds like the guitar riff of #1 hit “Sweet Child o’ Mine” and “Welcome To The Jungle.” The band dominated the 1980’s and 90’s music scene selling more than 100 million albums worldwide and ushered in a decade of hard charging rock music. After leaving the band, SLASH went on to critical acclaim in his personal project Slash’s Snakepit, and global success with supergroup Velvet Revolver. He has been widely sought after by the biggest musicians of all time, performing with everyone from Michael Jackson to Stevie Wonder to Ray Charles. SLASH is one of the marquee playable characters in Guitar Hero III, has two signature Gibson guitars in his name, and authored his own top-selling biography SLASH in 2007. Slash recently landed on the top of the charts with his first true solo album, SLASH. In addition to a long career filled with prestigious awards and accolades, SLASH was just honored by the Hollywood Chamber of Commerce who named him as an official selection for 2011 to receive a star on Hollywood’s iconic Walk of Fame.

About Los Angeles Youth Network
Established in 1984, LAYN is a 501(c)(3) not-for-profit organization whose mission is to empower abused, neglected and homeless adolescents to become self-sufficient. Our professional staff provides a host of outreach, emergency shelter, transitional and independent living services for youth, to support our overarching goal: To end homelessness, one youth at a time. Perla Hudson has sat on the board of directors and advisory board of this organization. On any given day, there are over 5,000 homeless youth on the streets of Los Angeles. LAYN is one of the only organizations providing shelter to anyone under the age of 18.