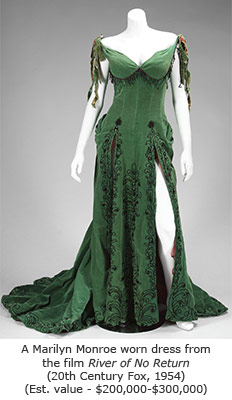 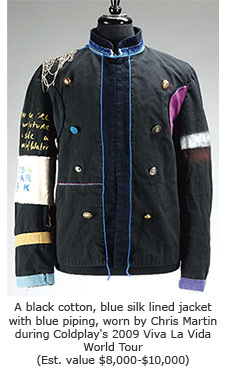 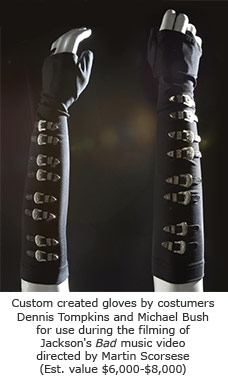 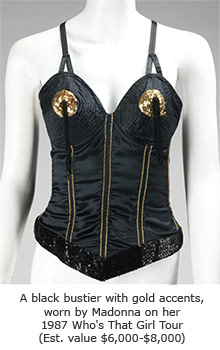 The Legends Auction returns with a showcase of film and music memorabilia from some of the world’s most admired superstars including legendary film icon Marilyn Monroe and the King of Pop, Michael Jackson. Other iconic pieces to be offered include personal effects from Elvis Presley, The Beatles, Madonna, Her Royal Highness, Diana Princess of Wales and many others. 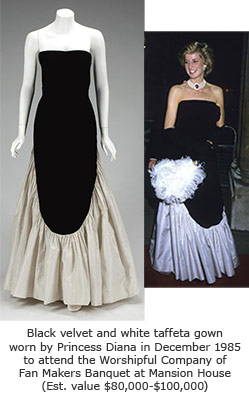 Marilyn Monroe seduced on-screen and film going audiences with her performance as Kay Weston in River of No Return. Monroe conjured a saloon hall vixen to perform “I’m Gonna Stake My Claim.” The provocative green gown she wore during this song and dance routine is offered for sale along with Monroe’s personal phone book, pearl necklace, medical prescription orders and a rare painting created by the iconic actress.

In 1985, Her Royal Highness Diana, Princess of Wales, was honored by the Worshipful Company of Fan Makers. Diana wore a stunning gown of white taffeta and black velvet designed by Murray Arbeid, and this will also be offered in the Legends auction. This gown was previously auctioned at the "Dresses from The Collection of Diana, Princess of Wales” charity auction shortly before her tragic death. The gown returns to the auction block as one of the few Diana dresses made available for public sale.

In 1987 Bernardo Bertolucci’s The Last Emperor won nine Academy Awards including Best Picture and Best Costume Design. A selection of these award winning costumes are offered for sale. The intricate costume pieces, some comprised of textiles that are over 100 years old, and are works of art in their own right.

In the tradition of period films examining the relationships of Eastern and Western cultures, Julien’s offers ten costumes from the film The Last Samurai. An impressive riding costume worn by the character Ujio as he rides into battle includes full body costume armor and stunt swords as seen in the film. Battle costumes, stunt weaponry and ninja attire from the film are also offered for sale.

Science Fiction heroes and villains also share the spotlight in this very special auction. The third incarnation of Batman in Batman & Robin pitted George Clooney’s Batman against Arnold Schwarzenegger’s evil Dr. Freeze. For the villainous, The Batman Return’s Red Triangle gang costumes, Neon Circus costumes and Jim Carrey’s Riddler bodysuit will be sold. Also to be offered are costumes from Dennis Hopper’s portrayal of Deacon in Waterworld, Alfred Molina’s wayward tentacle as Doctor Octopus from Spiderman 2 and a nefarious Thuggee costume from Indiana Jones and the Temple of Doom blockbuster.

Julien’s Auctions will also offer an extraordinary opportunity to own some very special pieces that pay tribute to Elvis Presley. On March 19, 1955 Elvis Presley’s first live performance was recorded at The Eagle’s Hall in Houston Texas. The recording master’s and the copyright to market and reproduce this recording are offered for auction for the first time. Along with the five song recording is a seven-minute interview with the young Presley from 1956 and a 15-minute interview with guitarist Scotty Moore discussing his relationship with Elvis.

Other Elvis items featured in this auction are an acoustic guitar inscribed to one of his fan club presidents, a handwritten set list from an engagement at the International Hotel in Las Vegas, a prop gun given to Presley for luck by MGM executives as he began his concert series in Las Vegas and a handwritten note from Presley to Col. Parker.

Among the unique Beatles memorabilia being offered is a note signed by John Lennon, a Paul McCartney signed Hofner bass, handwritten lyrics from the bands first bassist, Stuart Sutcliffe, and a rare 1963 Beatles concert poster.

The King of Pop, Michael Jackson will again take center stage at this highly anticipated global auction. From early Jackson 5 photographs, career spanning “gold” and “platinum” record awards as well as stage worn clothing. The Wiz offered a new way for Jackson to showcase his talents. Not only a musical star, The Wiz made Jackson a film star as well. Julien’s will auction a make-up model of Jackson from his role as The Scarecrow created by Stan Winston, used by the make-up crew to assure continuity. Jackson again took on acting and complicated make-up as he starred in the video for his hit song “Thriller.” In the beginning of the video, as Jackson played a high school student who morphs into a “Werecat” before his shocked girlfriend’s eyes, different latex masks were used to create the affect. Three different masks and an unused latex mask formed to fit Jackson’s face will be sold.

Other Jackson items included are stage worn costume pieces from the Destiny tour of 1979-1980 and 1984’s Victory tour. The bead work, mirrors and sequins on these costumes allowed the massive crowds to follow Jackson on stage, even from a distance. Among the items are a red lame jacket with rhinestone covered collar, a white two-piece mirrored costume designed by Bill Whitten and a rhinestone belt worn by Jackson.

Other auction highlights include a Madonna signed “Sex” book, a stage worn gold bustier from her Who’s That Girl tour, images of Madonna by Herb Ritz signed by the superstar, an early model headshot with information sheet, and a recording of Madonna singing “Simon Says” with her band The Emmy’s.

The Legends Auction is pleased to feature a matched collection of gem quality emeralds worn by Angelina Jolie for the Kung Fu Panda 2 (Dreamworks Animation, 2011) photocall at Cannes Film Festival in May, 2011. Both the emerald tablet bracelet and emerald cushion ring are accompanied by a signed letter of authenticity from Angelina Jolie and 100% of the proceeds from the sale of each item will benefit children living in regions affected by conflict or the devastation of natural disasters.

The Legends Auction at Ponte 16 in Macau, China is expected to set a new worldwide record and will be a fitting tribute to the musical and entertainment icons who continue to play an important role in the lives of every fan. For more information on the Legends Auction in Macau China go to www.juliensauctions.com 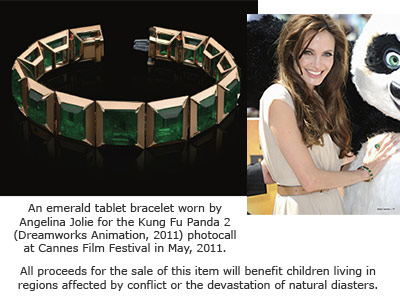 Registering to Bid
Registration is required to bid in this live auction and can be done either in person at the exhibitions and auction or by visiting the Registration page at www.juliensauctions.com before the sale or by calling (310) 836-1818.