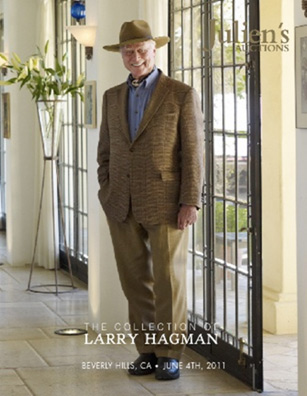 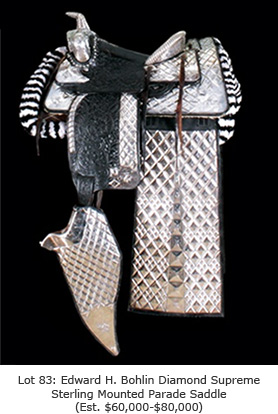 Beverly Hills, California ... May 9th, 2011 … Actor Larry Hagman is set to appear in a TV remake  of a different kind when his personal antiques, fine and decorative art, furniture, and memorabilia from the classic 1980’s primetime soap opera Dallas are offered for auction in a sale to be held at the prestigious Julien’s Auctions Gallery in Beverly Hills, California on Saturday, June 4, 2011.

Larry Hagman, stage, film and television actor, producer, director, and charitable spokesman, is best known for his roles as the villainous JR Ewing in Dallas and Major Tony Nelson in I Dream of Jeannie. In 1965 Hagman hit the jackpot playing Barbara Eden’s TV “master” and eventual love interest, Captain Anthony Nelson in the hit sitcom I Dream of Jeannie for NBC. The show had climbed to the top 10 in the first year and was NBC’s answer to both successful comedies Bewitched on ABC and My Favorite Martian on CBS. By 1970 Hagman’s character had finally married Jeannie during its last season.

In mid-1978 Hagman was cast as the conniving elder son and businessman J.R. Ewing, a man whom everybody loved to hate in the classic, now legendary show Dallas. Hagman joined a cast of relatively unknown actors at the time and instantly created what was to become a legendary part that insured a ratings bonanza. By the end of only the second season Dallas was a bonafide mega-hit and the show aired for thirteen seasons ending in 1991. One of the most famous episodes in primetime television continues to be Dallas’ “Who Shot J.R.” episode which aired as a cliff-hanger season finale in season 2. Hagman latered starred in a TV remake of Dallas which aired on the TNT network. Hagman has continued to star in several television programs, commercials and films. Along the way he and his wife Maj have collected fine antiques and collectibles and remarkable memorabilia from a career that spans over 50 years. 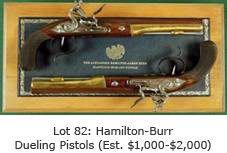 Highlights of the Hagman sale include an abundance of elegant furnishings from the hilltop estate Heaven, a spectacular property built by the Hagmans in 1991 overlooking the Ojai Valley. Highlights coming to the block include an 18th century Spanish Colonial painting of the Madonna and Child (est $4000/$6000), an antique Italian credenza (est $3000/$6000), a Rosewood Regency drop leaf table (est $2,000/$3,000), a set of ten Chippendale style dining chairs with needlepoint upholstery (est $3,000/$5,000) a British Sterling Silver tray (est $4,000/$6,000)and many pieces of modern and contemporary art including works by Rhonda Roland Shearer, Barton Benes, Bruce Killen, and Kristina Hagman.

In true style and spirit of Dallas many Western selections are highlighted in the sale including the magnificent Edward Bohlin Diamond Supreme sterling mounted parade saddle (est $60,000-$80,000), guns, knives, artifacts, furnishings, and many custom cowboy hats and pairs of boots which are monogrammed for Larry Hagman or worn by Larry Hagman as J.R. Ewing.in Dallas. Items include those by makers Charlie 1 Horse, Stetson, Nocona, and Tony Lama (estimates ranging from $100/$200 to $1000/$2000). 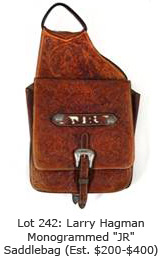 This auction is also proud to showcase items from the estate of Mary Martin, Hagman’s mother and acclaimed stage actress in her own right. Some of the highlights include a cast signed sailor hat from South Pacific (est $1000/$2000), an Arthur Rackham signed limited edition of J.M. Barrie’s Peter Pan ($2000/$3000), a sterling presentation gift box from Noel Coward (est $800/$1,200), a Giannini acoustic guitar used in The Sound of Music (est $800/$1000), artwork, clothing, furniture, vintage travel trunks, and jewelry and a remarkable 14K gold charm bracelet featuring charms gifted by the casts of some of Martin’s most famous stage productions (est $2000/$3000).

From his trademark cowboy hat to his infamous lines on Dallas and his many charitable cause related endeavors, Hagman’s properties span a legendary time when primetime television had you glued to your seat until the next episode. The collection of Larry Hagman offers fans and collectors a rare opportunity to own a piece of Hollywood history and personal items, each with its own story to tell. 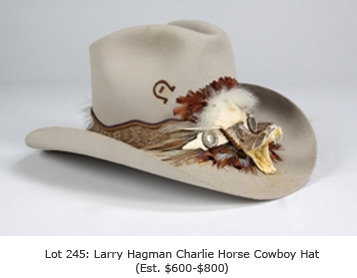 About Julien's Auctions
With expertise specializing in entertainment memorabilia, Julien's Auctions has quickly established themselves as the premier auction house in high profile celebrity and entertainment auctions. Julien's Auctions presents exciting, professionally managed and extremely successful auctions with full color high quality auction catalogs unlike any other auction company. Previous auctions include the collections of Cher, U2, Barbra Streisand, Debbie Reynolds, the
estate of Marilyn Monroe and many more. Official website is www.juliensauctions.com.