Los Angeles, CA — "Collector and museum quality" items from the life, career and estate of the legendary Bob Hope will be sold during a live televised and real-time online auction conducted by Julien's Auctions (www.juliensauctions.com) on October 18th and 19th, 2008 at the Beverly Hilton in Beverly Hills, California. Proceeds from this auction will benefit the Bob and Dolores Hope Charitable Foundation. Mr. Hope's extraordinary career spanned Vaudeville, Broadway, radio, television and film, and his numerous USO tours to entertain U.S. military troops earned him the admiration of generations of fans around the world.

Highlights in this historical auction from the life and career of Mr. Hope include: a one page letter dated October 23, 1943 from Bette Davis to Mr. Hope; a red and white feathered Indian headdress worn by Mr. Hope on the cover of Life Magazine on May 11, 1962; a Movado watch inscribed "To Bob Hope in sincere appreciation — The Cleveland Press Christmas Show 1944"; and a turquoise western suit made by Nudies of North Hollywood, worn by Mr. Hope on several television shows including Barbara Mandrell, Mandrell Sisters Show and Ann Margaret Rhinestone Special. 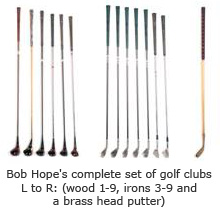 “It is a privilege and an honor to work with a collection of such incomparable depth spanning nearly 100 years of the most celebrated career in entertainment history,” said Darren Julien, President/CEO of Julien's Auctions.

“This auction celebrates 100 years since Bob Hope arrived in the United States to become one of the most iconic entertainers in the history of Hollywood,” stated Martin Nolan, Executive Director of Julien's Auctions.

As part of this historic event, Cunard Line will pay tribute to Bob Hope by featuring a very special appearance by Mr. Hope's daughter, Linda, in association with the line's award-winning guest enrichment program Cunard Insights™. The September 4, 2008, Transatlantic Crossing from New York to Southampton aboard Cunard's flagship QUEEN MARY 2 will be a memorable experience reminiscent of the Golden Age of Ocean Travel and offer an added element of "Hollywood" from this bygone era by celebrating the career and life of Bob Hope. 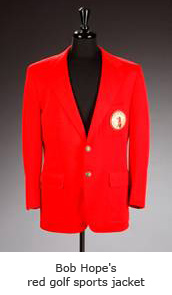 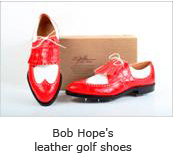 Cunard Line president Carol Marlow commented, "Bob Hope is recognized as one of the most beloved entertainers of our time. We are delighted to partner with the Bob Hope Estate to honor his legacy and present our guests with this once-in-a-lifetime program that illustrates his contributions both as an entertainer and humanitarian."

Cunard will welcome Ms. Hope as she begins an international publicity tour to promote the first-ever Bob Hope Estate Auction. Exhibitions include Newbridge Silverware's Museum of Style Icons in County Kildare, Ireland and an exhibition in New York prior to the live televised auction in Los Angeles in October. Auction highlights traveling on the voyage include: original deck plans with annotations by Mr. Hope for his passage in 1939 on the QUEEN MARY; a note signed by Prince Philip on Buckingham Palace stationery dated September 11, regarding a Queen Elizabeth silverware set Mr. Hope purchased at a charity event in 1952; Christian Dior reading glasses, a boxed set of tea knives and forks owned by Queen Elizabeth; a letter from President Ronald Reagan dated December 12, 1995, written on Presidential stationery; his small black leather address book; his desk plate reading "Bob Hope - Thanks for the Memories;" Mr. Hope's well traveled steamer trunk suitcase; a WWII sterling silver cigarette case; and a black leather attaché case imprinted "Bob Hope". 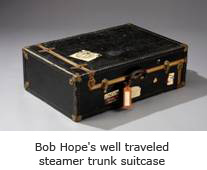 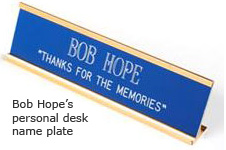 The history between Cunard's famed ocean liners and Bob Hope dates back many decades and includes a special performance that took place onboard the QUEEN MARY in 1939 when Mr. Hope performed "Thanks for the Memories" in the Queen's Salon. Many of his fans knew him as a passionate golfer and Cunard guests often observed him practicing golf drives from the upper decks of QUEEN MARY and QE2.

During the September 4 voyage, Linda Hope will share an intimate look inside the life of her world-famous father, moderate a film and television retrospective and offer personal anecdotes about the historic memorabilia showcased onboard as part of the auction highlights tour. Guests will have the opportunity to attend a special "auction preview" program with Linda along with Julien's Auctions President/CEO Darren Julien and Executive Director Martin Nolan. 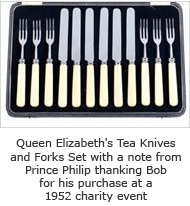 To make reservations on the September 4, Queen Mary 2 Crossing, contact your travel professional, call 1-800-7-CUNARD or go online to www.cunard.com.

Beginning September 1, bidders will be able to place proxy bids, register for the auction and explore the history of the more than 700 lots in the Bob Hope Estate Auction taking place in October 2008 by visiting www.juliensauctions.com. Full color collectible auction catalogs detailing the history and images of each lot will be available for purchase through Julien's Auctions.

Registering to Bid
Registration is required to bid in this live auction and can be done either in person at the Beverly Hilton in Beverly Hills, California, or by visiting www.juliensauctions.com before the sale or by calling (310) 816-1818.

About Julien's Auctions
With expertise specializing in entertainment memorabilia, Julien's Auctions has quickly established themselves as the premier auction house in high profile celebrity and entertainment auctions. Julien's Auctions presents exciting, professionally managed and extremely successful auctions with full color high quality auction catalogs unlike any other auction company. Previous auctions include the collections of Cher, Madonna, U2, Barbara Streisand, Muhammad Ali, Debbie Reynolds, the estate of Marilyn Monroe and many more.

About Cunard Line
Cunard Line, operator of the luxury ocean liners Queen Mary 2, QE2 and Queen Victoria, has long been synonymous with the quest for new discoveries and the epitome of British refinement since the company's first paddle-wheeled steamer, Britannia, crossed the Atlantic in 1840. Cunard voyages bring together like-minded travelers who relish the Cunard hallmarks of impeccable White Star ServiceTM, fine dining, sophisticated adventure, the legacy of historic voyages and transatlantic travel.

About Newbridge Silverware
For 70 years, Newbridge Silverware has designed and produced homeware products, continuously innovating and producing items that are relevant to the lifestyles of each new generation of consumers. Setup in 1934, to bolster the local economy, Newbridge owes its origins to local visionaries who recruited the services of five cutlery tradesmen from Sheffield to pioneer the craft in Newbridge. The company quickly earned a valuable reputation for design, quality and craftsmanship and soon took pride of place as the cutlery brand in Irish homes. Today Newbridge Silverware is the largest provider of quality giftware and tableware in Ireland. Owned and managed by the Doyle family since the early 1970`s, Newbridge Silverware is regarded as Ireland's premier brand.