Los Angeles — On November 14th, 2006, highlights from the career of David Cassidy will begin their world tour at the Hard Rock Cafe London, travel to New York and conclude with the auction at The Beverly Hilton in Los Angeles on December 16th.

In 1970 The Partridge Family premiered, skyrocketing David Cassidy to superstardom. Cassidy had the #1 selling single of the year and became the consummate teen idol. His official fan club grew to become the largest in history, exceeding those of Elvis Presley and the Beatles. His career has continued to boast gold and platinum records, extremely successful Broadway, West End and Las Vegas shows, and tours that have broken box office records. 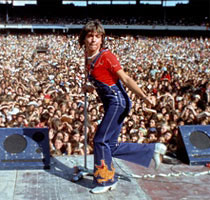 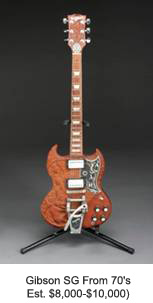 Julien's Auctions is pleased to announce a live and online auction of multiple items from the unprecedented career of David Cassidy with a portion of the proceeds benefiting the Grayson-Jockey Club Research Foundation and the Thoroughbred Charities of America providing a better life for thoroughbreds both during and after their careers. The beneficiary choices reflect Cassidy's passion for thoroughbreds which he owns, breeds and races.

The sale includes custom dark blue polyester overalls by Manuel embellished with custom embroidery featuring a ram, parrot and alligator with rhinestone accents worn on stage by Cassidy during concert performances in 1974, together with two color images of Cassidy wearing the overalls during a live concert and a concert ticket stub from the same event at the Melbourne Cricket Grounds in Australia, 1974, which exceeded all prior box office success there (Est. $800-$1,200).

No David Cassidy sale would be complete without one of his trademark guitars. Cassidy's customized Gibson SG electric guitar (Serial Number 358106) featuring a heavily carved body and customized pick guard is included. Owned and played by David Cassidy worldwide during various concert performances and appearances during the 1970s, it was originally custom created for guitarist Louis Shelton, Cassidy's guitarist and arranger, who sold the guitar to Cassidy in 1970 (Est. $8,000-$10,000). The guitar was also on display at the Rock and Roll Hall of Fame featuring an exhibition of items from the career of David Cassidy.

"I have saved these items for the past three decades and am now glad to see them go to new homes where they will be treasured," says David Cassidy. Cassidy will make personal appearances at the exhibitions in London, New York and Los Angeles. He will be in London also promoting his new compilation CD, Could It Be Forever…the Greatest Hits (Sony BMG Music UK), his autobiography, also titled Could It Be Forever (Headline Books, March 5, 2007), and an April '07 tour of the UK. He also continues to tour the U.S.

Also included in the auction is a custom white polyester jumpsuit by Manuel, with custom multicolored floral themed embroidery and rhinestones, worn on stage during concert performances by Cassidy in the United States and Europe in 1972 and 1973 (Est. $800-$1,200).

Not all items are for high end collectors with unlimited disposable incomes. "There is something for everyone," says Martin Nolan, Executive Director of Julien's Auctions. "David has included several collectible items such as his Partridge Family metal lunch box with accompanying metal thermos (Est. $200-$400)," Nolan further states.

Other highlights in the sale include: