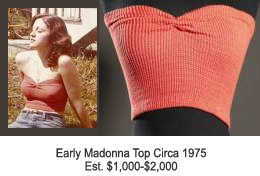 New York/London — On June 17th, 2006, JULIEN'S AUCTIONS, a premiere Los Angeles auction house specializing in Entertainment Memorabilia, in partnership with TREASURE HD, the first and only 24/7 high-definition channel for and about people with a passion for collecting (Dish Channel, #9473), present one of the most diverse live and online Entertainment Memorabilia sales in auction history. This important sale will be televised live from Planet Hollywood Times Square in New York on Saturday, June 17, 2006 from noon to 5:00 p.m. ET. Simultaneously, bidders will follow the action via an audio simulcast at Planet Hollywood London, as interested collectors worldwide participate in the auction online, via www.juliensauctions.com, or by calling (310) 836-1818. "This is the first time an auction of such significance has been held live simultaneously in two cities, and we are expecting online activity from at least four continents," says Darren Julien President/CEO of Julien's Auctions. 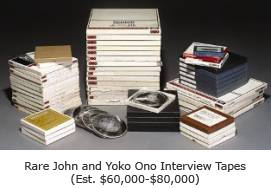 The auction features an array of rare items of unquestionable provenance, including a collection of never before broadcast in their entirety audio interviews with John Lennon and Yoko Ono conducted by their friend and confidant Howard Smith. Among his many achievements during the 1960s and 1970s, Smith wrote a weekly column for the Village Voice titled "Scenes," which chronicled groundbreaking counterculture in New York City. It was during this time that Smith was asked by John and Yoko to conduct several long interviews which featured candid conversation and commentary by both John and Yoko on: the impending breakup of the Beatles, their "bed-in" for peace, the Beatles historic Shea stadium concerts, John's solo career hit (The Collection of Howard Smith) "Imagine" and many other topics. "These interviews cover the most intriguing part of Lennon's life and career,"adds Martin Nolan Executive Director of Julien's Auctions. "Howard Smith had the privilege to interview John and Yoko through these important years of their lives together."

One lot in his collection features a one-page, handwritten letter to Howard from John and Yoko dated April 14, 1973. In full reading (sic): "Dear Howard, Something came up in N.Y….we had to go-/sorry if its fucked you' round-we'll make it up/hope your not upset-give our love to Peter & Betsy-please tell them we were HASSLED with business to call them back-we might be back sooner than we think (to L.A.) – in onto see you in the BIG apple!" (ESTIMATE: $1,000-$2,000). 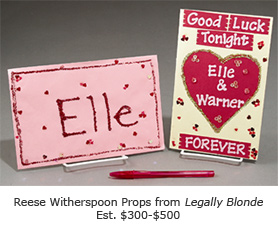 A strong selection of contemporary Hollywood memorabilia is offered from the archives of MGM. A group of 30 lots containing costumes and props from blockbuster feature films including "Legally Blonde," "Barbershop I & II," "Hotel Rwanda" and "The Pink Panther." Leading the archive is a group of costumes and props used and worn by Steve Martin and Beyonce Knowles in "The Pink Panther." "We are thrilled to be granted unprecedented access to such a historic collection which has been so meticulously archive arhived. It's the fantasy of every film fan to have access to such a treasure trove of screen seen props and costumes," says Laura Woolley Chief Operating Officer of Julien's Auctions. Among the lots are a group of props used by Reese Witherspoon as she portrayed Elle Woods in "Legally Blonde" (MGM/United Artists, 2001). 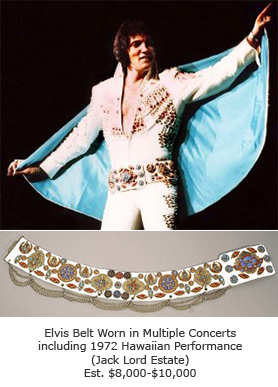 Another significant offering is a selection of items from the Estate of Jack and Marie Lord gifted to the couple by Elvis Presley. One highlight from the Lord Estate is a white leather belt owned and frequently worn in concert by Elvis Presley, including his well documented Hawaiian concert in November 1972. The belt is heavily adorned and embellished throughout with Asian and Indian style yellow metal, brass medallions, and colored stones. Also included from the personal life of the famous singer is the marriage certificate joining the lawful wedlock between Elvis and Priscilla Ann Beaulieu in lawful wedlock October 1967. It is signed by Justice of the Supreme Court of Nevada, David Zenoff, and countersigned by Memphis Mafia members Marty Lacker and Joe Esposito. Elvis and Priscilla were married at the Aladdin Hotel in Las Vegas, in the personal suite of the hotel's manager at 9:40am. Another rare item from the King's career is a partial set of lyrics to "America The Beautiful" handwritten in ink by Elvis Presley on a Las Vegas Hilton gift shop bag in 1975. In December that year, he performed a two week engagement at the Las Vegas Hilton where he added the patriotic song to his set-list to celebrate the upcoming American Bicentennial. His performance was received so well that his record label, RCA, released it the following year.

In addition, the live auction will feature some of the most collectible memorabilia from one of the greatest franchises in film-making history, James Bond, including Odd Job's gold metal ring (estimate $8,000-10,000) and his deadly black derby hat (estimate $20,000-$30,000), a diabolical device sharp enough to sever the head of a stone statue. We are very pleased to offer a wide range of James Bond property in this sale, which includes items from early Bond films starring Sean Connery as well as property from recent Bond films starring Pierce Brosnan. Perhaps most exciting is the prop derby hat used by Goldfinger's henchman Odd Job in "Goldfinger," which is the single most diabolical and deceptive device from the ultimate Bond film" states Julien's Memorabilia Specialist Rob Zabrecky. 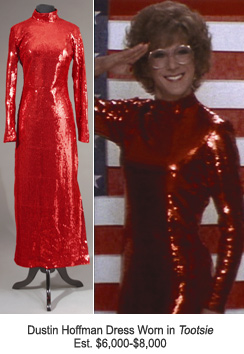 OTHER AUCTION HIGHLIGHTS INCLUDE:

Images are available on request.

Visit Julien's Web site at www.juliensauctions.com. Interested bidders can log onto to the site to register and to place advance bids.

The auction can be seen in exclusively on the VOOM HD Network, TREASURE HD (www.treasurehd.com), available nationally on DISH Network, channel 9473. Additionally, TREASURE HD will feature a preview show, highlighting the background stories of many of the major items in the sale. The program will premiere on Saturday, May 20th at 3pm, and will air daily until June 17th, the day of the auction.

TREASURE HD is the first channel dedicated to the over 70 million Americans with a passion for collecting. It is one of the VOOM HD Networks—15 channels of breathtaking 24/7, commercial-free high definition programming, with a range of content including movies, sports, the arts, travel, fashion, cartoons and news.