“Property consigned by The Estate of Mary Pickford is a large portion of the sale” says Darren Julien, President/CEO of Julien's Auctions. “These items include memorabilia and fine and decorative arts that graced the Pickfair Mansion for decades” Julien further states.

Highlights from the Estate of Mary Pickford include an original inscribed copy of “The Fun Of It” to Mary Pickford and Douglas Fairbanks from Amelia Earhart (Est. $5,000-$7,000) and an original life-size oil on canvas painting of Mary Pickford. This work was commissioned by Pickford and features two shadows which represent her two great loves — legendary film star Douglas Fairbanks and her long time husband, Charles “Buddy” Rogers. According to those close to her, this was her favorite painting of herself and hung at the top of the stairway in the Pickfair Estate for several decades (Est. $4,000-$6,000).

No sale would be complete without property from the life and career of Marilyn Monroe. Included in this sale is a photograph collection unparalleled to any other collection ever brought to auction. Highlights include unpublished photographs with the original negatives of Marilyn backstage of The Jack Benny Show (Est. $800-$1,200 per lot) and a series of original black and white images from The Estate of Andre de Dienes, famed Marilyn Monroe photographer to be sold at no reserve. 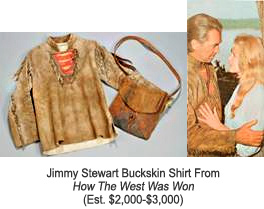 For the sport fanatics, a two page handwritten letter composed by future basketball star, Michael Jordan, in his hand to then girlfriend Laquetta, dated May 1st 1981. In part reading: “Laquetta, I would love to stay around you for the rest of my life. Maybe, someday it will come true.” The following year, he accepted a basketball scholarship from the University of North Carolina and scored the winning basket in the NCAA tournament (Est. $1,000-$2,000).

Included among the 400 additional highlights are: