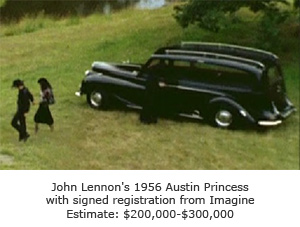 Julien's Auctions and Planet Hollywood are pleased to announce a live and online auction of important Rock 'N' Roll and Hollywood memorabilia. Spanning the decades, collectors and fans will find rare costumes, props, scripts and other ephemera from the most important moments in entertainment history.

The sale begins online October 2nd, 2005 on juliensauctions.com and will conclude live at the Aladdin Hotel and Casino in Las Vegas, October 29th, 2005. VOOM HD Networks will telecast this live celebrity-driven memorabilia auction, exclusively in high-definition, allowing viewers a rare opportunity to experience what is sure to be one of the world's most memorable auctions. Highlights from this auction will tour Planet Hollywood Japan (September 26th-30th, 2005), Planet Hollywood New York (October 11th-15th, 2005) and the Aladdin Hotel and Casino Las Vegas (October 24th-29th, 2005). 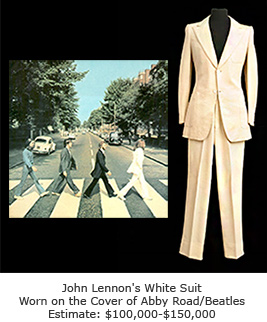 "Property consigned by Debbie Reynolds, Carrie Fisher, Shirley Jones and Larry Hagman to name a few of the celebrities, will be shown in high definition offering unparalleled clarity. "Viewers at home can bid real-time online as they watch the auction live" say's Darren Julien, President of Julien's auctions.

This sale includes unparalleled property from the career of John Lennon. Of particular note is Lennon's white suit from the final Beatles album cover "Abbey Road" (Capitol Records, 1969). Lennon remembering the famous cover shot, explained: "We were just wishing the photographer would hurry up. Too many people were hanging around ... We're meant to be recording, not posing for Beatle pictures — that's what we were thinking. And, I was muttering, Come on, hurry up now, keep in step." (Both excerpts from "The Beatles Anthology," Chronicle Books, San Francisco, 2000, pages 341 and 342).

There was close scrutiny of every detail in the image, including Lennon's attire. With rumors of Paul McCartney's death surrounding the album, fans engaged in wild speculation. "This iconic white suit fueled rumors that Lennon represented a clergyman in McCartney's funeral procession." said Laura Woolley, C.O.O. of Julien's Auctions. Although the impromptu photo session featured each member of the Beatles simply wearing the clothes they wore to work that day, it famously became a part of one of the most wildly off based rumors in the history of popular culture. The final Abbey Road re-mix on August 20th would be the last time all four Beatles would share the same studio space (estimate $100,000-$150,000). Another legendary Beatle item on sale is John and Yoko's 1956 Austin Princess used in "Imagine" (Joko, 1973) with the original car registration signed by Lennon when he purchased the car on August 26th 1971. The modified hearse can be prominently seen in "Imagine" a film created to promote Lennon's Capitol Records LP bearing the same title. The opening scene shows, John and Yoko walking in the grounds of their British home at Tittenhurst Park. Shortly after filming Imagine, John and Yoko moved to New York (estimate $200,000-$300,000). A portion of the proceeds from the sale of these items will benefit Amnesty International USA. 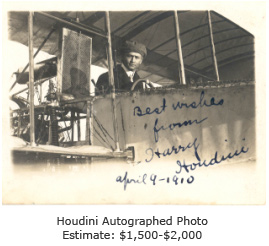 Another first for the presenters of this auction is having the highlights travel to Planet Hollywood Japan. "This is the first time an American Pop Culture auction has been promoted and/or exhibited in Japan" says famed Japanese magician Princess Tenko. "In this auction of firsts, we are excited to be a part of history as we represent Julien's Auctions in this rapidly growing market of collecting in Japan." The sale also includes a selection of historical items from the life and career of world renowned magician Houdini; a lock used in his act (estimate $1,500-$2,000); key and pick (estimate $1,500-$2,000; and autographed photos (estimate $2,000-$3,000 each). 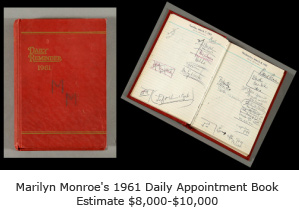 No sale would be complete without property from the life and career of Marilyn Monroe. Providing a rare glimpse into the fabled life and career of the actress is her 1961 daily appointment book from the estate of her secretary May Reis. This one of a kind book contains Marilyn's appointments, invitations, engagements, phone calls and notes relating to her 1961 personal and professional schedule.

Notations in Marilyn's hand include: March 10, "May, Remind me about dentist this morning;" April 23rd, "Judy Garland/8:30/Cargagie Hall" (a well remembered milestone performance by Garland). There is also a conspicuous absence of activity between February 9 and March 4, presumably due to Marilyn's psychiatric hospitalization. "This is truly a remarkable insight to Marilyn's personal world just one year before her death," said Darren Julien; President of Julien's Auctions (estimate $8,000-$10,000). Another unique piece from Marilyn Monroe is her personal phone and address book (circa 1958-1961) containing hundreds of Marilyn's personal friends and contacts included are: Frank Sinatra, Elizabeth Arden, George Cukor, Fox Studios, Samuel Goldwyn, Hedda Hopper, Erno Laszlo, Ed Sullivan, and many other names from Marilyn's personal and professional life. (estimate $6,000-$ 8,000). A typed version of Marilyn's phonebook, from the Estate of Marilyn Monroe, was sold recently by Julien's Auctions for $90,000. 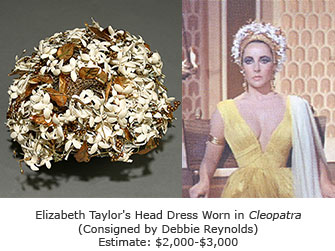 A selection of items in this sale was consigned by Debbie Reynolds and Carrie Fisher to benefit the new Debbie Reynolds Hollywood Motion Picture Museum in Pigeon Forge, TN. A period head dress worn by Elizabeth Taylor in "Cleopatra" is just one of the highlights consigned from Reynolds legendary collection (estimate $2,000-$3,000). Larry Hagman has consigned two suits and a signed cowboy hat from the hit TV series Dallas. Shirley Jones consigned her dress from "Evening in Byzantium" with Co-star Glenn Ford, as well as a stage suit worn by her late husband Jack Cassidy.

VOOM HD Series Executive Producer George Lansbury said, "Working with Julien's is amazing; they always provide us with great, authenticated property from famous people with fascinating stories. Their auction house embraces new media and understands the value of our audience now, and the potential for the future.

Included among the 300 additional highlights are: